Once upon a time in the land ‘under the porch’ lived a little brown worm. He was a lovely little worm, all sleek and shiny and long. And he was a happy little worm… except for one thing. He worried about things. One of the things he worried about was why he looked different from the other members of his family. He was sleek and shiny and long, and they were all tiny and grey and small. They could curl themselves up into little balls. And although he could curl himself up also, he could never curl up as tight as they did.

One day when he was lying around in the dirt ‘under the porch’ with his grandma, Mrs. Roly-Poly III, he looked sad.  His grandma, who couldn’t bear to see anyone sad, asked him what was wrong. Willy (that was his name) just put his head down and mumbled something that Mrs. Roly Poly III couldn’t understand.

“Willy,” she said gently, “You know you can tell me anything. If something is bothering you, please tell me what it is so I can make it better.”

“But it’s silly, Grandma. You will laugh at me if I tell you.”

“Then tell me, Sweetie, what’s bothering you?”

And he did. He told her how he had always wondered why he looked so different from the rest of his family.  His grandma looked at him and smiled. “Oh Willy,” she said, “There’s a simple answer for that. Let’s go over to ‘the big garden’ and I’ll explain.” So, Willy and his grandma inched their way out form “the dirt under the porch’ and worked their way over to ‘the big garden' where the dirt was darker and very nice.

“This place is great, Grandma. How come we haven’t been here before?”

“Well, our people have lived in ‘the dirt under the porch’ for generations. We don’t travel too far from home. But I knew you would like it here.”

“Why is that, Grandma?” Willy asked. “Why did you know that I would like it here?”

Mrs. Roly-Poly III smiled and said, “Sit down, Sweetie, and let me tell you a story. Do you know the ‘big people that live in the house’ connected to the porch under which we all live?”

“That’s right. And our story begins with that little girl…

One day a long time ago, on a Sunday morning, that little girl was playing in the house when she spotted a tiny critter inching his way across the floor. He was very small and all alone and the little girl felt sorry for him. So, she picked him up very carefully and took him outside on the porch. She didn’t want him to be alone so she put him in ‘the dirt under the porch’ where she knew us Roly-Polys lived.  That little critter was you, Willy. We took you in, cared for you, and came to love you very much. But the truth is, Willy, is that you’re not really a Roly-Poly, you’re actually an earthworm.”

“Well,” his grandma said, “If we sit here in ‘the big garden’ long enough, you’ll see.” And sure enough, after a bit, there came along a whole string of earthworms, sleek and shiny, long and beautiful, gliding in and out of the soft garden dirt like fish through water.

After the worms had passed, Willy’s grandma said, “Willy, your Roly-Poly family love you very much. But we have always known that one day you might want to move over here to ‘the big garden’ where the dirt is better for earthworms. Do you want to do that now?”

Willy sat thinking quietly for a little while. Finally, he said, “No, Grandma, I want to go back home with you to ‘the dirt under the porch’.”

Grandma Roly-Poly III smiled happily and said, “Then that’s just what we’ll do. Maybe later when you’re older, you might want to come back to ‘the big garden’.”

So, Willy and his grandma returned to their little home in ‘the dirt under the porch’…   where all his Roly-Poly family waited for him with open arms.

And Willy wasn’t worried anymore. He had learned some important things:

3.  That if you’re worried about something, it’s best to tell someone who loves you!!

This next children's story was also written for my grandkids - but it came to me while I was on a silent retreat at Montserrat on Lake Lewisville.  I felt like an 'odd duck' as while most (if not all) of the retreatants stayed walking or jogging on the road during free time, I tended to wander off into the wooded and treed areas around the lake... enjoying what nature had to offer. 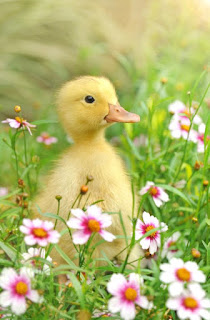 (written for my grandkids by Memaw)

Once upon a time in a little Hollow in the Wood, an Old Owl sat on a stump of a tree. He was very old and tired, and his feathers had already started to turn gray. The winter was over, and everything was becoming green again. But the Old Owl's bones were aching, and nothing looked as good as he remembered it.

Not far from the Hollow, along a winding dirt road, was a duck yard. In this duck yard a mama duck and her seven baby ducklings were anxiously awaiting the arrival of duckling number eight. But duckling number eight was in no hurry to hatch. Finally, Mama Duck put her head down right next to the egg, which already had a small crack in it, and said, "Are you coming out, Little Duck? We're all waiting."

Before he could say any more, Mama Duck started fussing.  "Now, look here, Little Duck. We've waited and waited, but we can't wait any longer. Little ducks have to hatch, they have to eat, and they have to go to the duck pond."

Wanting to be a good little duck, he obediently popped out. Mama Duck had already begun feeding the other ducklings. Little Duck looked around the duck yard. His eyes took in the bright green grass, the big blue sky, and the brilliant yellow sun shining overhead, and he said, "Oooh, it's so wonderful out here, much nicer than inside my egg."

At this point Mama Duck was trying to feed him, which was difficult since he was more interested in seeing everything, and not very interested in eating. "As I just told you, little ducks have to hatch, they have to eat, and they have to go to the duck pond," fussed Mama Duck.

Again, wanting to be a good little duck, he obediently ate. Having fed her ducklings, Mama Duck quickly started out for the duck pond. They marched all in a row with Mama Duck saying, "One, two, three, --one, two, three, -- no dawdling now."

But they hadn't gone very far when duckling number eight saw something that made him stop. "Oooh, Mama Duck, it's so pretty. What is it, Mama Duck?"

Mama Duck turned her head, without stopping her march, and said, "Little Duck, it's a flower, but we have no time for flowers. We have to go to the duck pond. Now, get in line, One, two, three, -- one, two, three." Little Duck took one more look at the pretty flower; its bright red petals and yellow center swaying in a field of green. Then he ran back in line as quick as his little legs could carry him.

Just as they turned a bend in the road, something else caught his eye, and he stopped. "Oooh, Mama Duck, look! It's lovely, what is it, Mama Duck? Is it a flower?"

Mama Duck and the other ducklings were too far ahead to hear, but a tiny voice answered with a giggle. "No-o, I'm a butterfly -- kind of like a flower-- but I can fly." Having said this, the butterfly fluttered off into the air a few feet above Little Duck's head.

"Oooh --you're lovely," was all Little Duck could say, and seeing the other ducks so far away, and hearing Mama Duck's voice echoing in his ears, "One, two, three,-- one, two, three, --" Little Duck made his own feet fly. He quickly caught up with the other marching ducks.

But just then, the little troop of marching ducks was passing right by the Hollow where the Old Owl sat on his stump in the Wood. The others marched right on by without even a sideward glance. But Little Duck stopped short in his tracks.

The Old Owl opened one eye, and stared at the little duck. "Humph - - a butterfly? Of all the nonsense? A butterfly? Of course I'm not a butterfly. I'm a bird, an Owl to be precise, a very wise old owl."

The little duck could only say, "Oooh!" But just as the owl had closed his eyes again, Little Duck asked, "Uh, excuse me, Mr. Bird, but if you are so wise, could I ask you a question?"

The owl slowly opened one eye and then the other, and said, "I guess you may ask me one question."

Little Duck looked down at his feet, trying to think of the right words after all, he had only hatched this morning. Finally, he said, "Mr. Bird, Mama Duck says little ducks have to hatch, they have to eat, and they have to go to the duck pond."

"Yes…” said the owl, trying to be patient, “…and just what is the question?"

Little Duck thought for a moment, then said, "Am I a bad little duck, because I want to take time see the wonderful sky, the pretty flowers, the lovely butterflies and, he added hanging his head shyly, ... the beautiful birds?"

Then seeing Mama Duck almost out of sight, the Old Owl said, "Humph, now you'd better be off as your mama and the others are almost at the duck pond."

Little Duck looked over his shoulder and sure enough, he could barely see his mama and the other ducklings. Turning around quickly, he started off after them on his short little legs. Then, he stopped, turned back to the wise old owl, and said, "Thank you, Mr. Bird."

The Old Owl who had already slumped down on his stump and was almost asleep again, opened one eye again and said, "What? What's that? Thank me for what?"

The little duck quickly replied, "For being beautiful!" and hurried on his way.

The Old Owl, who now had both eyes open, sat there and thoughtfully watched the little duck until he was out of sight. Then he smiled, sat up tall and straight, smoothed his ruffled old feathers, and said to himself, "No, thank you, Little Duck, for making me feel beautiful again."