Now for remnants of "Christmas around the house"

... and I will leave you with this picture that my sweet DH took of me sleeping with the cats after everything was over and done (and I had a migraine). Cats are such a comfort.... 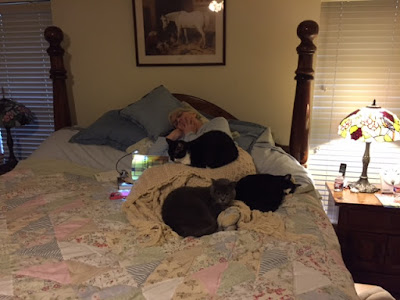 Wishing you all a wonderful safe happy 2016 !

Posted by Rian at 11:15 AM 12 comments:
Email ThisBlogThis!Share to TwitterShare to FacebookShare to Pinterest

News says area had total of 9 tornadoes, but the one that caused the most damage was EF3/4 that came through Sunnyvale, Garland, and Rowlett. Number of Fatalities is still 11, although about 18 are still unaccounted for. Most deaths were in their cars on the road when tornado hit... and number of houses affected are about 600.

Friend of my youngest son (who lives several blocks away) lost their home. He said that he and his wife and kids were sheltering in their bathtub as the tornado hit. They survived, but they're house didn't.

And news was showing rescued dogs found in the rubble this evening.

That's about my update. Fighting a migraine today due to too much stress going on these last few weeks, but wanted to update yesterday's blog.


Posted by Rian at 3:39 PM 4 comments:
Email ThisBlogThis!Share to TwitterShare to FacebookShare to Pinterest

the night AFTER Christmas...


Posted by Rian at 8:06 AM 10 comments:
Email ThisBlogThis!Share to TwitterShare to FacebookShare to Pinterest


Writing this post while traveling back to Baton Rouge Sunday morning. DH's mom passed away Friday - not long after my last post. So we're heading back. Hadn't unpacked my luggage from previous trip... so just had to add a few things and go. Kids enroute this time. We are in 4 cars. Thanks to our iPhones we are all communicating while on the road (those of us that are not driving are doing the texting). It's about a 7 - 8 hour drive from Dallas to Baton Rouge depending on traffic... but we hope to be there by evening.

Obviously I didn't get to catch up on reading blogs Friday as planned.  I am reading some enroute, and I will continue when we return.

It's now Tuesday and we're back on the road heading home to Dallas. Foggy, but not too bad. The funeral mass was yesterday. The trip from the church in Baton Rouge to the cemetery on the River Road in St. Rose was "an adventure"... (it was raining so hard you could barely see in front of you). It took about an hour and a half.  We were about 10 minutes late, but so was everyone else. And we all arrived safe - thank goodness!

After the service, we all gathered together at family home in Baton Rouge... reminiscing. Family stories were told and the younger ones got an earful - stories about their parents growing up. Sad time, but loved being with the family again. Bittersweet.

As for myself, I learned that even at 70, my bones must be fairly strong as I took a flying fall in the hotel right before we left for the church. Apparently they had just mopped the floor in the lobby hall and when I stepped on it, my legs flew up in the air and I landed on my right hip (hard!). It happened so fast, I was stunned! I'm bruised (both wrists and right leg and hip) - but nothings broken! I'm pretty stiff and sore everywhere due to jarring... but otherwise OK. (Due to the quarter size bruising on both wrists, I'm guessing my wrists helped break the fall).

BTW, we saw gasoline in Louisiana for $1.65 !
Posted by Rian at 5:07 AM 8 comments:
Email ThisBlogThis!Share to TwitterShare to FacebookShare to Pinterest

I titled this post "I'm back" because I haven't been on the computer in a while... due to:

1. Our old computer crashed  - was kind of wishing it had died, but lo and behold, the Geek Squad at Best Buy resurrected it (??#!%). So we will limp on with it for awhile.

2. We had to make an emergency run to Baton Rouge, La where DH's mom was just put into a hospice there. We only stayed a few days and even then we weren't sure if she knew who we were. She is 98 and had 5 sons. One died from an overdose of anesthesia during a tonsillectomy when he was 3, but the other 4 all went on to graduate from college - and despite my MIL's age, she has been doing fairly well until recently. But we are very glad that we went. It was nice to see and talk to family.

However,  we were surprised at the traffic in Baton Rouge nowadays. Granted, it's been a long time since DH and I were students at LSUBR, but getting around in the traffic was really difficult. I don't think I'll complain about Dallas traffic ever again. Someone told us that it's been that way since Katrina - when so many moved out of New Orleans and settled in Baton Rouge to stay...(?)

I also find it hard to believe that Christmas is next week! I'm just sending out Christmas cards today and starting to bake rum cakes.


While I'm in the kitchen here, I'll post a picture of Rose huddled up to the Aga. It's been in the 30's here and Rose at 21 seems to need to keep warm... as you can see.

and while I'm here, I'll take a pic of my new little addition to my "bird/chicken collection" on top of the Aga. 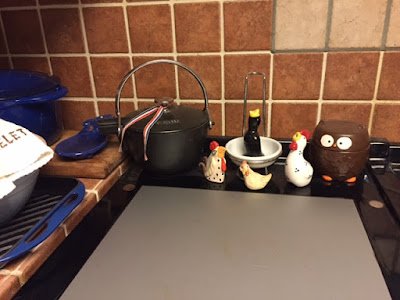 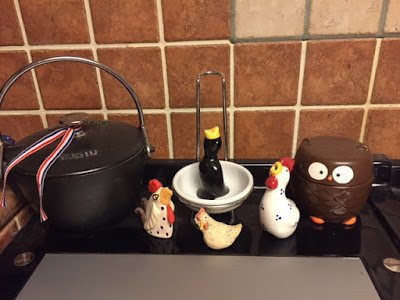 The little blackbird and owl were given to me, and I bought the 2 larger chickens... but the little guy in the middle is one of my own ceramic creations.


And FYI... tomorrow I plan to spend part of the day catching up on everyone's posts from the last week! (... and continue baking!)


Posted by Rian at 5:36 PM 6 comments:
Email ThisBlogThis!Share to TwitterShare to FacebookShare to Pinterest


DH and I went walking at the Mall Monday.  Santa was there talking to the kids before the photo shots, so I snapped a few pics of him. He really is a nice looking Santa. 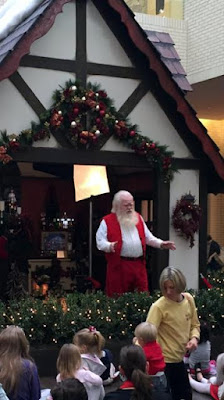 ... and further down there was a Santa and sleigh complete with reindeer as well as a gingerbread house display 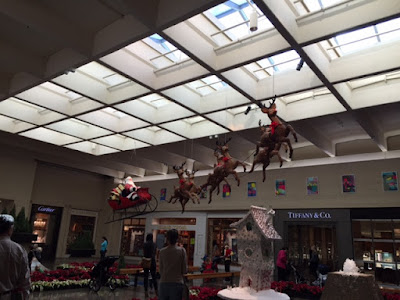 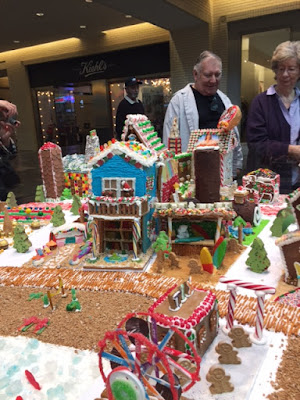 Talking about being good to eat - I just made a huge pot of African Chicken Peanut soup. We don't make a lot of soup - but this one is so easy and delicious that we do try to make it fairly often. My daughter makes it also down in San Antonio. I sent her a picture on my iPhone as we were talking and she said , "Funny... I was just thinking about that soup".

We also bought some white chocolate peppermint tea at Teavana. It's one of their seasonal teas that you can't get at other times throughout the year. I hope to buy more when they put it on sale after Christmas.

Well, that's about it. Oh... I did promise someone I would post a pic of my cat sculpture that blew up in the kiln.  I actually modeled it after Ghost except for the ears. Ghost has really neat little ears, but some cats (especially some kittens have very large ears and it's so..oo cute.)


After I did the ears, I knew they were too large... and I was planning to remove and redo them. But when I showed DH, he said he kind of liked them (probably reminded him of Skita's ears), so I decided to leave them alone.

Oh, and DH got a picture of one of our *on again - off again* outside feral kits this week. He is about 6 - 9 months old and has a beautiful mane of grey fur around his neck. He and his mom show up in our front garden ever so often.


Posted by Rian at 5:06 PM 10 comments:
Email ThisBlogThis!Share to TwitterShare to FacebookShare to Pinterest 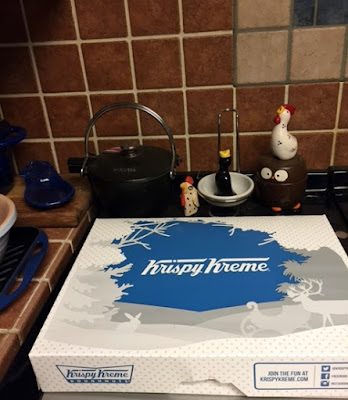 OK, I'm not a donut person... BUT... hot, fresh-baked Krispie Kreme donuts are hard to resist! And this morning, we didn't.  As you can see, 3 are already missing. DH had 2, I had one, but will have another before the morning is out. I guess we will have to make it up the rest of the week... perhaps by walking more and eating salad?  (whatever... they are really good and worth it)

We did get the tree decorated... mostly. Lights and ornaments are on, but may need a little more red trim... 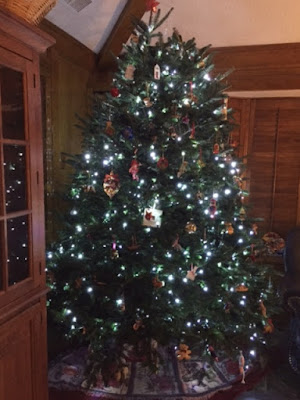 And we did put out a red wood box with "Merry Christmas!" on it on the front porch and filled it with hay... for any feral visitors who might need a place to rest. And since we had a few days of 30 F temps, we put the heat lamps out on the back porch.

I ordered our Christmas cards, and sent out a few packages, but am still behind on some things. Hope to get to Christmas baking next week.

Concerning my pottery, the soap dishes came out fine, and I'm OK with my leaf vase, but my cat sculpture blew up in the kiln... at least that's what I was told. It didn't actually blow up, but cracked in several places and although the instructor put it on the shelf so I could see it Saturday, it disappeared Friday. Things do tend to disappear off the shelves at the studio as there are tons of people around taking classes and anyone can walk through.

Well, that's about the news here on my home-front. I'm hoping to keep Christmas low key and 'kind'... if that makes any sense. We don't have a lot of money to spend and really, most of us don't need anything. We're not rich financially, but we're plenty rich when it comes to family and love.

Love the idea of "pay it forward" and ever since someone insisted on giving us $20 a few years ago to help feed the feral cats (which we do anyway), we've tried to pass it on. This year we gave to both our SPCA as well as one in Ontario, Canada (thank you Natalie)... and I like the idea of tipping $20 (even if your meal didn't cost that) around Christmas for all those who have to work long hours during the holidays. It's a little thing, but... 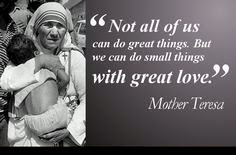 Have a great week!

Posted by Rian at 12:48 PM 17 comments:
Email ThisBlogThis!Share to TwitterShare to FacebookShare to Pinterest

The food was wonderful... (everyone brought something delicious)... and the company was fantastic!  We also went to see the last Hunger Games movie Friday and then hung out at the house later that evening.  I wish I had thought to take more pics while everyone was here, but was too busy enjoying the company to think about it. Someone took this one on my cell phone while we were all sitting around the fireplace...


Since Thanksgiving, we've had a lot of rain and cold weather, so most of my time has been spent sitting around the fireplace... and as you can see in the next pics, Tux and Julie prefer to do this also.

Later I found this...

Guess now it's time to focus on Christmas... which is what? 3 short weeks away!  Lots to do, but what it boils down to is more family time - looking forward to that! 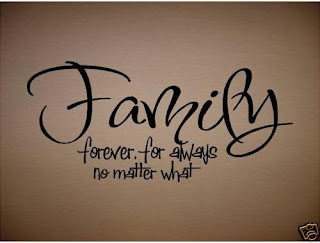