Well, DH and I finally got our first Covid vaccine yesterday. No side effects except for a sore upper arm.  So glad to have that done and over. After the second one (in a few weeks), it will only be a short time until Easter... and then maybe it will be safe to be around the kids and grandkids again!

I know that we should continue to wear masks and do all the things we've been told to do... and will. But it would be great to be able to get together with them after all this time.

The weather has been wonderful this week... after the awful Artic Storm.  It was  80 degrees yesterday... and only a week ago it was minus 2! But it is cooling down this afternoon and they're saying rain is coming, possibly hail, but hopefully nothing too serious.

I have to tell you that the outside ferals did fine during the below freezing temps. We did have heat lamps and blankets and beds about and a few did use the garage... but still I was afraid that I'd find them frozen in their beds. But they did well, bundled together sometimes 3 or 4 on a chair or in a bed... even one little possum decided to sleep on one of the pillows under the heat lamp with the cats. (I have a picture, but it's not very good as it's taken at night and the heat lamps cast a golden glow)

Nothing else to report. Spent the morning sweeping and mopping the kitchen floor... ordered another box of gloves and masks from Amazon... and plan to make pizza tonight for supper!
I did mail the baby quilt I made and two crocheted baby afghans to my grand-nephew (niece's son's first child - grand nephew, right?) for the new baby they're expecting. I started the quilt right after they were married, but the crocheted baby blankets are pandemic projects. So glad to have someone to send them to.  ; )
That's it. Wish I had more interesting things to post... but it is what it is.
How about a few pics of things I love: 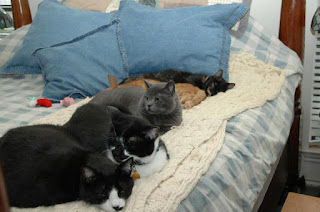 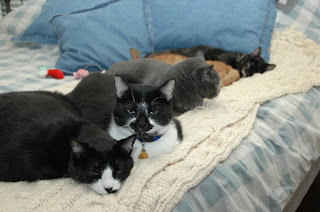 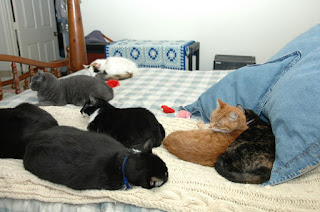 Our cats years ago...
and a few posters that I like: 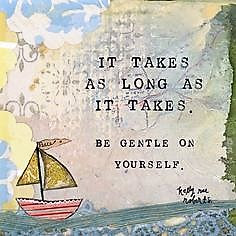 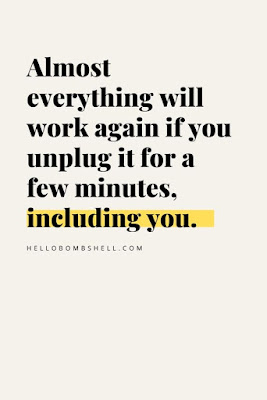 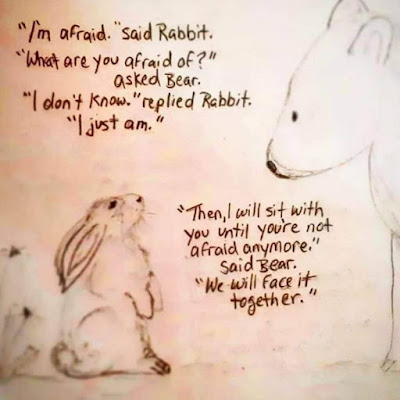 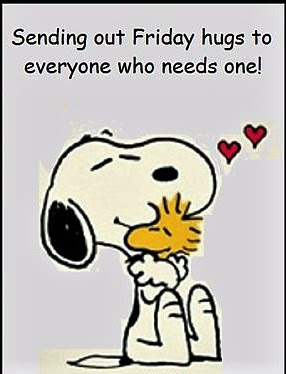 Posted by Rian at 10:21 AM 24 comments:
Email ThisBlogThis!Share to TwitterShare to FacebookShare to Pinterest
Labels: 7 cats on bed, first covid vaccine

What a difference a day makes...

Also... we were contacted yesterday about the Covid vaccine and have an appointment next week! What a difference a day makes!

Not that the failure of Texas Utility System during this Arctic air crises is over - because it's not. There are still people without power, still  some without water - although now with the temps up and roads clearing, people can actually get out and find help... or others can get to them. But there are broken water pipes all over, homes and businesses flooded, and tons of insurance issues. It will be quite the mess to clean up... and may take years.

To be fair, this Artic storm was unprecedented. And everyone will blame someone else. But... what it boils down to is that the system must be winterized... so that it can't happen again and this will of course be expense, but it must be done. After this week, I can't imagine anyone thinking otherwise.

Sending out loving vibes to everyone. Hope you are all well and safe and please,  please, please, let there be some breathing space between now and whatever happens next... 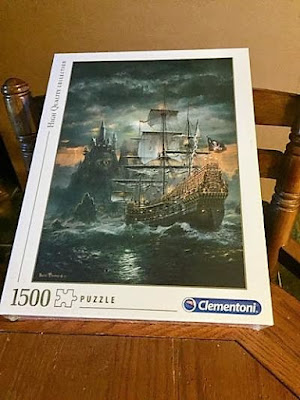 OK, it was -1degree F early this morning. That's a bit ridiculous for Texas. Seriously. We may get several over 100 degrees in the summer, but minus temps - no - at least not here in this part of Texas. The weatherman said that we had this -1degree here back in '89, but neither DH or I remember that - and we've been here since '71.

Anyway, it's COLD! The outside ferals' water dishes keep freezing and we keep replacing them.  And trying to feed them a bit more often to help them keep warm. The heating lamps are a big draw and some have taken to going into the garage. We don't really need to put birdseed out as the birds seem to enjoy the cat food and they (bluejays anyway) are noticeably fat.

Both my son's house here and my daughter's house in the hill country were without power for a few hours yesterday. And DH's brother's house in Houston is still without power. He says his inside temp this morning was 47 degrees. They are bundled up and have put their refrigerated/frozen items outside since the electricity is off.

This is definitely an incentive to get a generator. I've been talking about this for years, but we've never bit the bullet.  Now... we just might. And I was also wondering why Texas is having all these power problems when other states up North and other cold places like Canada, etc. don't (or at least I'm not aware that they do). Is it something that the state of Texas can do to avoid this in the future?

Seems like just another thing we knew could happen, but weren't prepared.

I am a bit concerned that we will have a really big water bill since the faucet water all over the house has been streaming for days to protect the pipes. But DH says it's better that than busted water pipes and the damage it may cause.

Oh well, it's at least taken our minds off the pandemic and the vaccine distribution!

I heard someone on the news say that some who have had their power off moved into hotels. Not everyone could afford to do that, but it is a solution if your power is off too long and you're able to get to a hotel on these roads... as long as the hotel has power (but most likely hotels have generators?).

We are expecting more power outs due to the rolling blackouts... but so far, so good. We are conserving energy, lights off, thermostat set at 68, no large appliance use, etc. And we do have both the gas Aga and the gas fireplace.

Take care my dear blogging friends. This weather is dangerous. This pandemic is dangerous. This political atmosphere is dangerous. I think that it is safe to say that we are living in dangerous times. But... I feel that we will get through it all - together. Maybe it will make us stronger... and even more important... kinder.

Our neighbors next door are keeping an eye on us (the old folks) and come by lately when they make a grocery run to see if we need anything. This morning the only urgent need was coffee. We use Keurig's Dunkin Donuts 100% Columbian k-cups and have run out. We order both from Keurig and Amazon... and both deliveries have been delayed due to the weather and roads. This  is such a simple kindness that I wonder if they could possibly know how much we appreciate it. 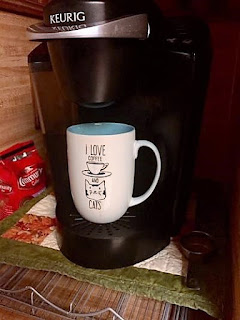 I keep Community coffee around for these occasions (if we run out of k-cups), but the grind isn't really meant for the k-cups and I've never been able to get the French press to taste right (probably grounds are not ground for either). Luckily I can get by with hot tea, but DH really needs his coffee.

Wishing everyone a warm safe healthy week! Thinking Texas should be back to normal winter temps by Friday (hope!hope!). And praying for all of you who may be in the path of this Arctic weather.

Posted by Rian at 9:33 AM 19 comments:
Email ThisBlogThis!Share to TwitterShare to FacebookShare to Pinterest
Labels: arctic temps, coffee, rolling blackouts

Arctic air has hit Texas!  Our temps are in the 20's (F)... and they are hinting that they may get down to 8 degrees (F) by Sunday or Monday. (This is not acceptable)  Texas can get cold, but not that cold.  Is this due to Climate Change?  One weatherman said that this is the coldest Texas has been in 30 years.

The number of accidents on the icy roads just this morning have been horrific. One involved 75-100 cars and had several fatalities. People are being told to stay home due to the roads rather than the pandemic for a change. Schools have closed. With these low temps all outside animals and house-hold pipes could be affected. My daughter is worried about both her pipes and her horses. The horses have blankets and stalls, but they are not inside a barn.

Only good thing about it being Texas is that the cold doesn't usually last more than a day or 2... this time it seems that we may have 4 days of below freezing weather.

We have blankets, baskets, and pet beds, as well as boxes and heat lamps outside for the ferals. We've also opened the garage door about 6 inches so they can get inside out of the cold. This morning there were 8 black cats huddled on the patio chairs under the heat lamps... and one black and white in the blanketed bed on the front porch.

As for myself, I'm huddled on the sofa near the fireplace... and will probably stay for the duration. I don't do well with cold. Not sure if my body simply doesn't hold the heat, but sometimes I can get so cold that nothing will do but to soak in a hot bath or shower until my body temp returns to normal again. Hot tea and layers help too.

That's my report for today. Those of you who live up north are used to this type of weather... but we aren't and don't do well in it.

However,  I do believe that this Arctic air is covering a large part of the U.S., so please stay warm and stay safe.  As they say, this too will pass.

And as always, thanks for visiting. I hope those of you who want the vaccine have gotten it already. Most of the people we know here have gotten theirs. We are on several waiting lists, but have not been contacted yet.... but expect to be in the next few weeks. 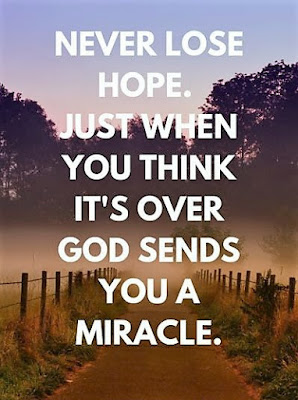 I have a dear friend  who needs a miracle... someone I have known since I was 8 years old, a childhood best friend who is still very dear to me. She called yesterday in tears as her daughter who has been fighting the return of breast cancer just had bad news from her doctor. Apparently the chemo/radiation for this metastasized cancer hasn't helped. They said there was nothing more they could do.

I believe that prayer is powerful. I believe that our thoughts are powerful. And I believe in miracles.  Please send her and her family your prayers and thoughts. I know that my wanting a miracle for her doesn't mean it will happen. But I would like to try... and I need your help.

Posted by Rian at 11:41 AM 28 comments:
Email ThisBlogThis!Share to TwitterShare to FacebookShare to Pinterest
Labels: miracle needed 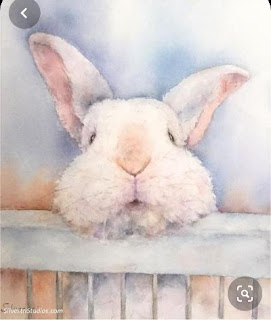 (I remembered this morning...) 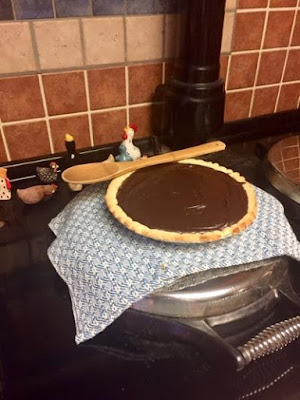 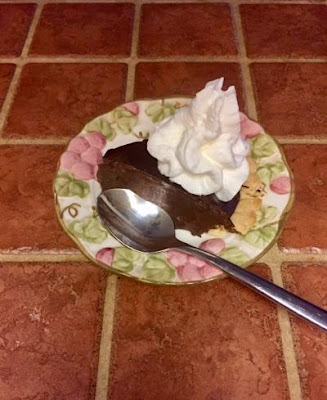 Perfect with a cup of black coffee...