Oldest grand daughter (17)  found this little kitten at a gas station last week.  My daughter sent me this pic of them both napping. 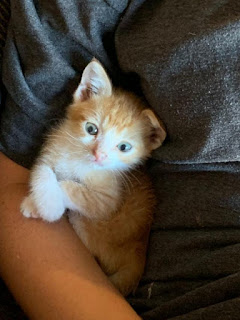 I think he's found a home... what do you think?

Other news on the horizon:

First - Thanks to all of you who shared my joy with the publishing of my book, "Time After Time"!  It's a good feeling to scratch something off my very small bucket list. But at the ripe old age of 74, time was running short.

On that same 'time was/is running short' theme... I will mention here also that I've been very concerned that my 'radiation' cough has gotten worse lately. Now I cough so much in the morning and sometimes after I eat or drink - that I choke and my eyes water and nose runs. Also I cough up very thick mucus. And when this happens, my nasal airway closes up and I have to breathe through my mouth. The episode doesn't last too long, but it's worrisome (and I hope I didn't gross you out too much).

I know some of the reasons this could be happening. And of course one of them is that my Breast Cancer could have metastasized to my lungs.  This was my worst fear.  However, this worry was put aside yesterday when I went for my annual Oncololgist's appointment. He both listened to my lungs and x-rayed them. Said that they were clear - no problem there. Thank goodness! What a relief!

However, he mentioned that other things that could cause these symptoms were reflux, asthma, and aspiration... and wants me to have a breathing/swallowing test run in the near future. I will do this, but probably not until September. We hope to visit our son in Hawaii in a few weeks... and that's the priority on my agenda now.

If anyone out there is even halfway familiar with these symptoms (which I have put off as due to 'old age' for a long time), I would appreciate your input.

But now I have another reason to celebrate besides the book being published! My worst fear hasn't come to pass.