It's 9 am and I'm getting ready to go to my annual Oncologist's appointment. It includes blood work and an exam. He will ask me how I'm doing... and most times (if not all) I say "Fine!"... not only because I do feel fine, but also because I tend to believe that all is well until someone tells you otherwise. And thus, I avoid the issue. However, this time I actually have some (possibly serious) concerns.  And I wrote them out to hand to him so I wouldn't be tempted to just not say them. I'm hoping he will tell me that there's nothing to be concerned about and that all the things that are happening... are things that happen normally as we age (Yes! for once I want someone to tell me that it's *just old age*). We'll see.

Beyond this, here's an update on the outside kittens (Shiney's 4 kittens).  She has finally brought them over to the back porch to eat on their own.  I took some pics.  One of our box turtles was eating with them. We have 2 box turtles that stay around on a regular basis.  I think there are more, but these 2 we marked with a tiny red dot on their shells... so we can recognize them. There's a smaller one that we believe is a male. His head is redder and he's a fast little bugger. We see him eating by both the front door and the back door. If he sees us, he makes those little turtle feet move! The other one is larger and not as red. We think this one is female. She is calmer and doesn't run when we get close.  Neither mind eating side by side with the cats and kittens. 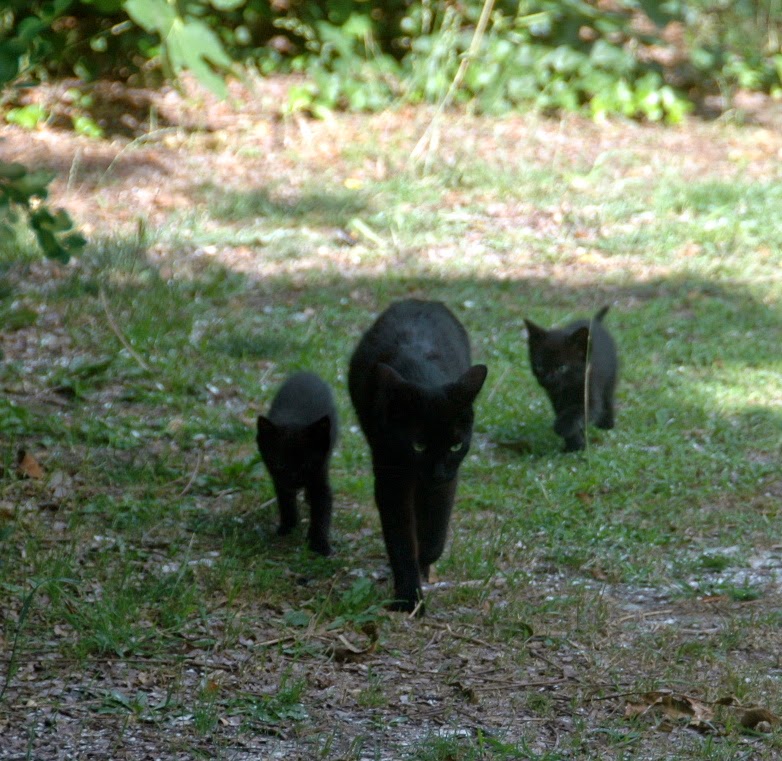 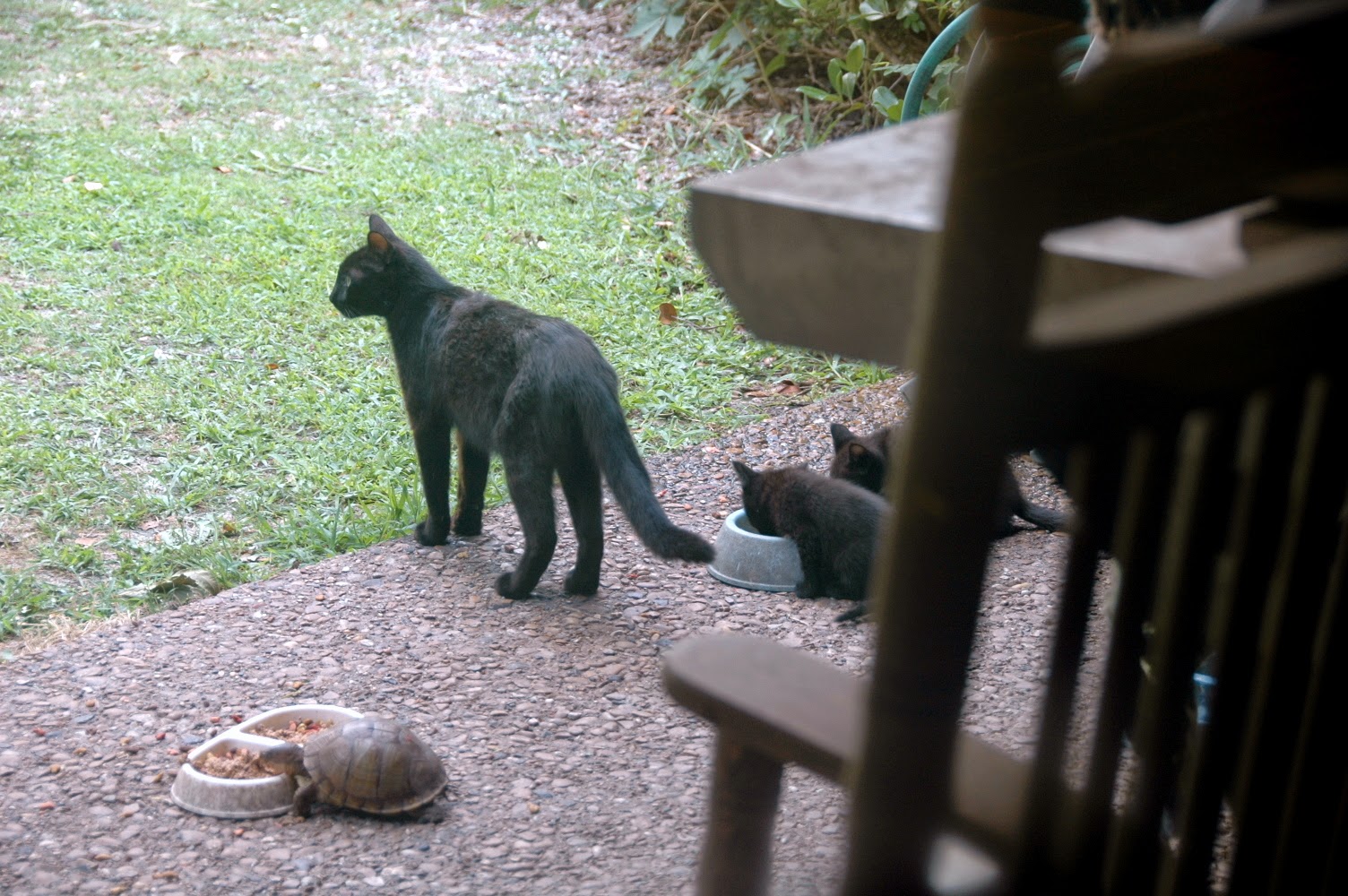 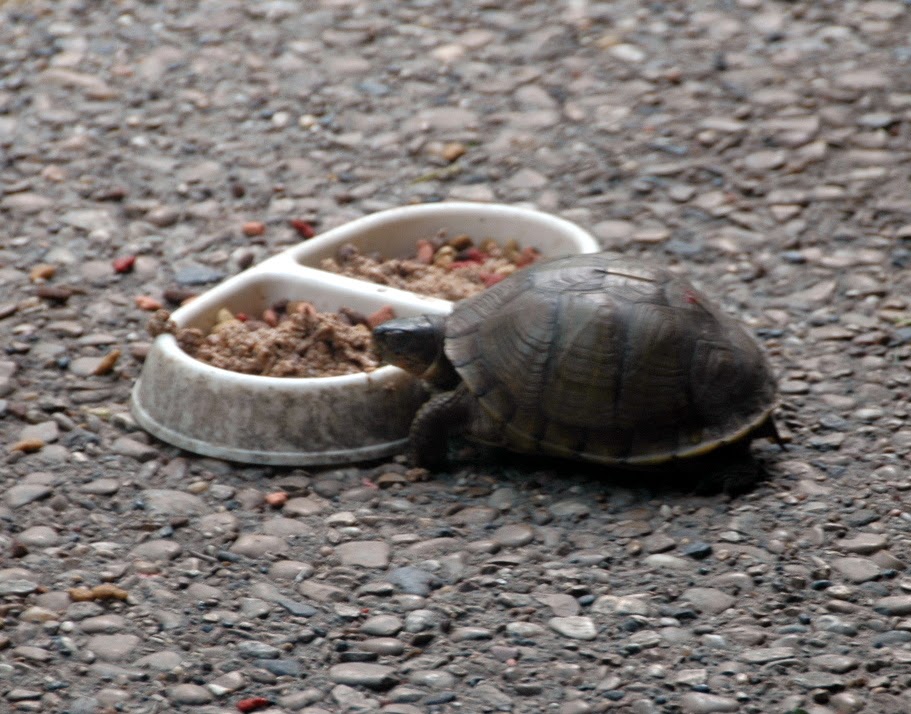 Father's Day here was celebrated at my oldest son's place. He grilled outside with his dad and brother while the little ones played soccer (or some form of soccer) in the yard... with the world cup games on all the TV's and iPads, etc. DIL and I stayed inside for the most part where it was cooler...  (was in the 90's Sunday). I made home-made potato salad (one with and one without bacon). DIL is vegetarian. I also made a tomato and basil pasta dish with toasted pecans for her. The rest of us ate grilled chicken and hamburgers as well as beans, corn on the cob, potato salad, Monterrey jack and garlic bread, etc. And we had key lime pie and an assortment of bundt cakes for dessert! 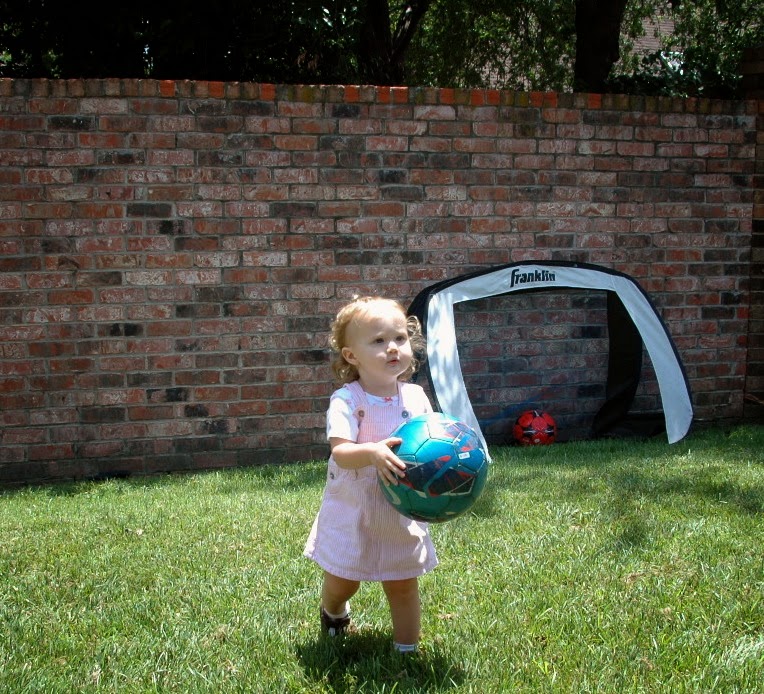 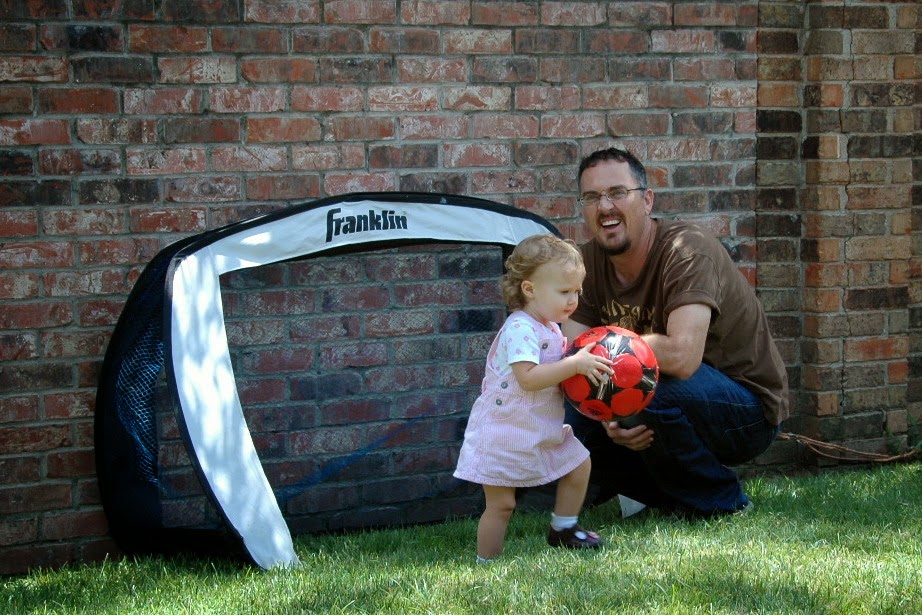 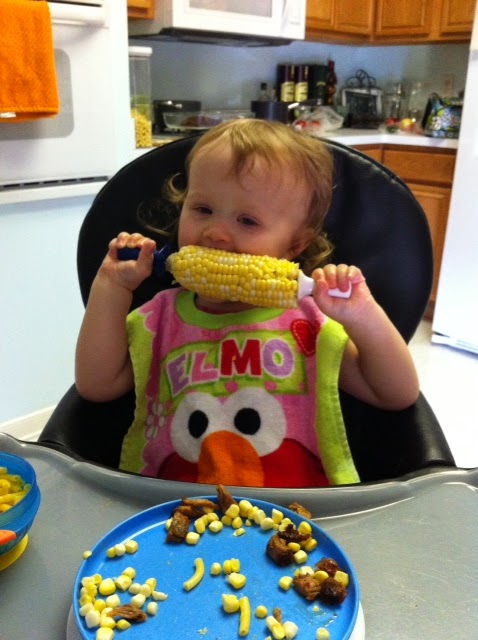 It's now Tuesday afternoon and my Oncologist visit is over.  We had a good discussion of things going on with me as well as my family's cancer history. He decided to do some extra blood testing just to make sure that all is well and also scheduled a abdominal sonogram as well as an appointment with a Gynecological Oncologist. Part of this is due to the fact that I recently found out that my sister died of *Ovarian* Cancer whereas I always thought it was Colon Cancer. It had probably spread to her colon, but originally it was Ovarian (I didn't know this). Since I have/had Breast Cancer, this news caused me some concern as my sister's daughter is a Pediatrician and she mentioned once that if you have 2 close relatives with a either BC or OC (or a combination) then it more than likely that you (or your children) may carry the gene. This is news that my daughter needs to pass on to her doctor.

Anyway, it's been an interesting morning....


Posted by Rian at 11:55 AM
Email ThisBlogThis!Share to TwitterShare to FacebookShare to Pinterest