Well, I was absent from class the last week of this semester. Had a combination of the stomach flu and then some problems with my right leg... (that part is still going on).  But since I wasn't there when presentations were made, I went last Friday to empty my locker and shelf. My instructor was there and she told me to "set up my display in the studio" and she would put it in the gallery later.  So this is it.

The project was to create a dinnerware set using a semi-famous person (I was assigned Frances Glessner Lee) as a guest. She was a millionaire heiress who lived in the 1800's and while an avid reader of Sherlock Holmes, she was very interested in forensic medicine. She and a good friend, a Dr. Magrath, were known to play a big part in replacing coroners with medical examiners. She also created dioramas of crime scenes which were so well done and explicit that the police dept used them to help their investigators learn how to collect evidence. These were called "The Nutshell Studies of Unexplained Death". She was also known to be the inspiration for Jessica Fletcher in the series "Murder She Wrote".

My theme was Death, Crime, and Medicine. It's difficult to see here, but the colors are black, grey, and red.  The plates, bowls, and cups were thrown, underglazed with black and grey, and then fired with a clear glaze.The book sculpture was made with slabs, underglazed, and then washed with a Blackbird stain to get the antiqued look... and then fired. My original plan was to use dinnerware that was black and grey but had a red gunsight on it with a human target in the center. However, when fired, the colors were not to my liking, so I went with the Sherlock Holmes profile. I had also found a website that sold crime scene fabric and had picked out some that had blood splatter and crime scene tape (to use as a tablecloth)... but had to cancel the order when I found out they could not deliver on time...

Unfortunately I was not there to see the finished projects of my classmates. However, I do hope they will remain in the art gallery long enough so that I will be able to return during the summer session and take some pictures.  If so, I will post them on my website.  Some of them I think were extremely well done.

Now... on a more somber note: Have any of you had a problem with your leg that involved intermittent pain that runs from the thigh down to the knee? My right leg has bothered me for several weeks, but it has gotten increasingly more debilitating. Some nights I could barely sleep for the throbbing. I also found it difficult to raise it... and found myself using my hands to move my leg from the accelerator to the brake while driving. I have tried sleeping on the sofa with my legs under pillows, then sleeping in a lounge chair. Neither worked very well. My first thought was sciatica.... which I've had before.... but the pain was not intermittent like this. One minute it's gone, and the next it's back. My next thought is perhaps I've done something to a vertebrae and that's affecting my leg. Actually when I started to feel the same pain in my left leg this past Monday, I called my Oncologist and asked his nurse what she thought I should do. She's got me scheduled for a full body bone scan this coming Wednesday.  I guess that will tell us something. But if anyone has any ideas, I'd appreciate hearing them.

And now for some GOOD NEWS:  Our box turtles are out again! They usually start showing up in May, but it's always fun to see them out. This one has shown up several times now... usually going after the dry catfood. 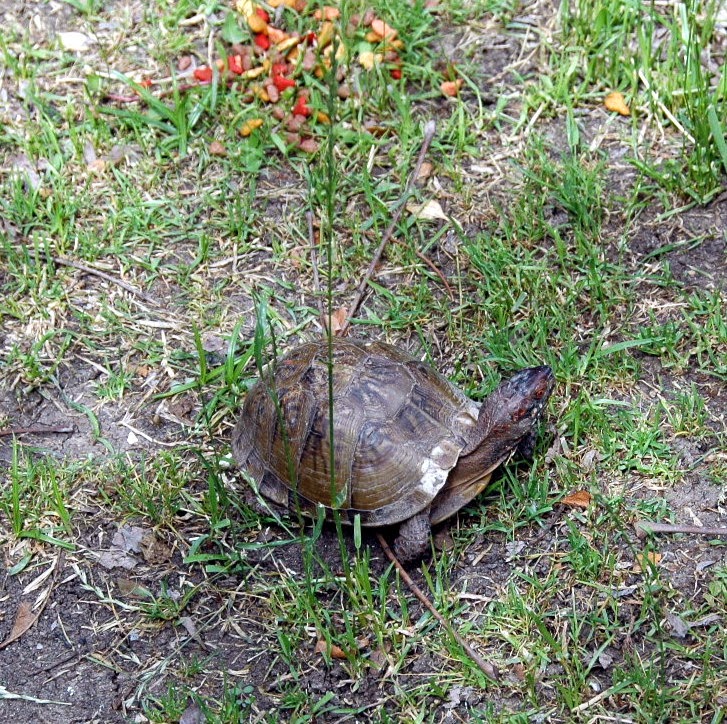 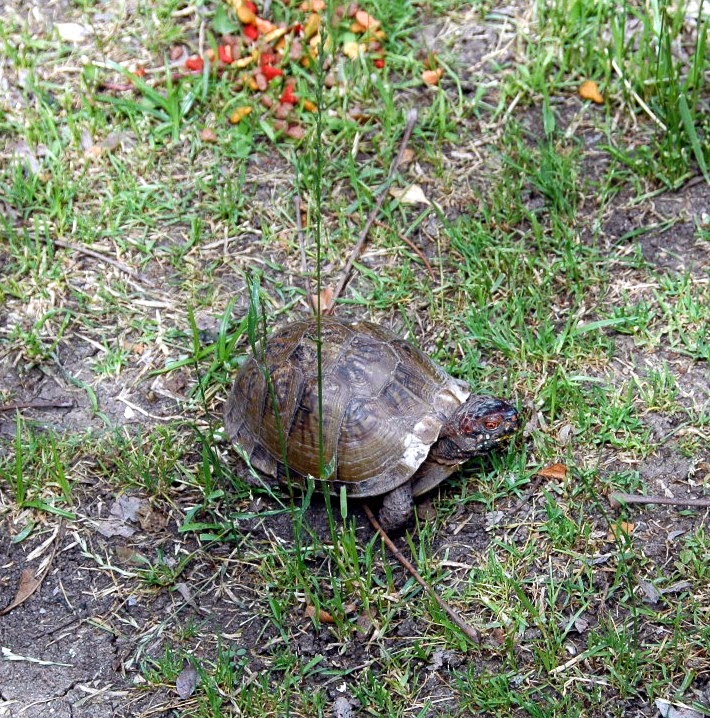 And Sam was also in the yard when I was taking pics of the box turtle.  He's one of our *regulars*... semi-feral, intact male that probably roams the entire residential neighborhood, gets in fights from the looks of his wounds, but always returns and in general doesn't cause any problems in our yard. He has really pretty blue eyes.

Posted by Rian at 6:53 PM
Email ThisBlogThis!Share to TwitterShare to FacebookShare to Pinterest