DH and I rented the movie, "The Butler" this week. I'm not sure what I expected, but I liked it. Seemed to convey a message that each of us finds our own way in the world... and that despite all our problems and prejudices, we're at least heading in the right direction... albeit slowly.

I grew up in the South in the 50's and 60's and remember the segregated buses and water fountains, etc. The sad thing is that I don't remember thinking derogatorily (is that a word?) of anyone, just that things were separate... that's just the way it was. As a child, you don't question why (or I didn't), you accept how things are as you don't know anything else. My parents never spoke bad of anyone (that I was aware of), and when things got ugly during integration, I didn't understand why people were so upset. Why were people acting so badly? What difference did it make where people sat on a bus? Of course there was much more involved than that and as I got older, I began to understand. Reading and watching stories like "The Butler", "The Help"  and "Twelve Years a slave" (although I haven't seen this yet) open our eyes. Things needed to change.

It also stirs up a strange dilemma in my mind... which may not be totally relevant here, but while we all struggle for equality under the law and in the eyes of God, isn't it advantageous to be not only accepting, but proud and appreciative of our differences? With the advance of technology, the world is getting smaller... (there's a McDonald's everywhere!). While this is convenient, it's also kind of a bummer... if you know what I mean. Eventually the world will merge into one giant conglomerate... with no diversity or individual character.

I seem to be digressing here... not sure where I'm going with this. But my mind tends to go off on tangents (especially so early in the morning - woke up at 4am). The truth is that we'll probably not survive long enough to get to that point. At the rate we're going, we'll all walk into traffic while our looking at our cell phones.

At this very moment, Julie is hiding on my messy desk... thinking I don't see her (ha!). 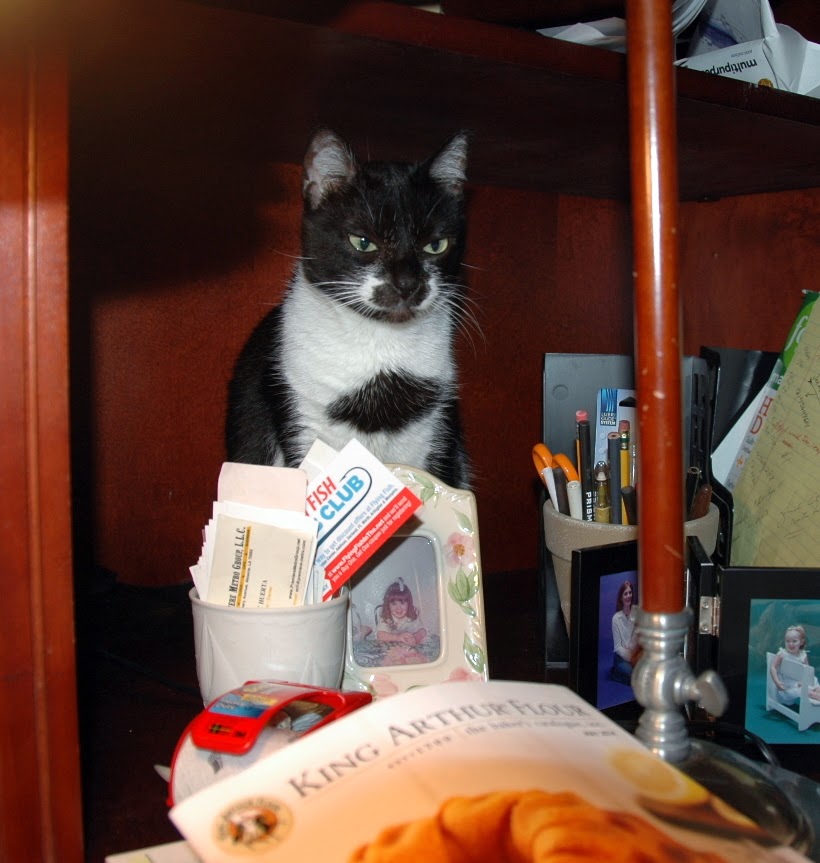 Oh, BTW, we have kittens! One of our feral females (Shiney) was crying around the side of the house yesterday. I looked out the office window and saw her little face looking in. Thinking she probably has just had kittens out there, I went back to what I was doing. Later DH mentioned that she was crying out by the back garage too. We didn't think much of it. She's young and probably was a bit overwhelmed. Well, lo and behold... when DH went outside this morning and *opened* the garage, Shiney came flying in... ran straight to a corner where you could hear kittens screaming. Apparently she had had kittens in the garage early yesterday and wasn't with them when DH closed the garage later that day. Poor Mama! She was separated from her babies and was distraught! But all are well now.

I did finally plant my hanging baskets with chives, thyme, and basil.  The dill wasn't looking too well, so I held off planting it to see if it recovers. And I want to find some curly parsley, but haven't seen any around for some reason.  We looked at another nursery today. They have flat parsley, but I prefer the curly kind.


Posted by Rian at 7:50 AM
Email ThisBlogThis!Share to TwitterShare to FacebookShare to Pinterest