down in the back again... 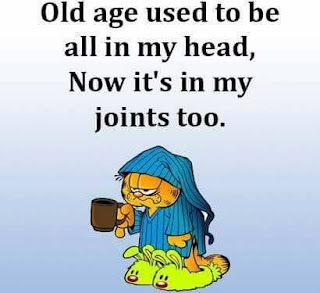 About 2 years ago, I had a bad back incident. Never really knew what brought it on, but suspected I had twisted it trying to see around a corner while driving, but never really knew how it happened. But I basically couldn't walk for about a week. Well, I've done it again... and don't have any idea how or when this time. It isn't quite as bad since I can still walk (with a brace and slowly), but haven't had to see a doctor yet.

My back started feeling a little odd Thursday evening when I got up from the sofa. It's the middle of my lower back.  And now it's continued through Friday and into Saturday... worse if I sit for a while and then try to get up. The brace is one of those sacro belts that are elastic and fit around your lower hips and connect with very strong velcro. It does help.

Anyway, just thought I'd share. Could be it's just one of those 'perks' of old age. Who knows?  (BTW, those long things with pinchers on the end - do they have a name? They sure do come in handy when you can't bend to pick up something. Every house-hold should have one of those... just in case)

It's cool this morning here in North Texas... in the middle or high 40's I think. We've had a lot of rain lately, but really needed it... mostly rain so far, nothing severe.

There are 4 outside feral cats sleeping together in one basket out back. DH just came to tell me. We have one that loves that basket and is always in it... and sometimes he shares it with another. This morning there are 4 squished inside it... guessing they must be feeling the damp.

I didn't get a pic of all 4 in the basket as if one sees me, he will run... and then all will run because he ran. Did not want to disturb them. They looked very comfy... although squashed.

Question:  Have any of you out there used coconut oil... either for cooking or skin or whatever?  I have a friend that swears by it for both... and some of my non-gluten recipes use it.
I did buy some, organic virgin coconut oil from Central Market (owned by HEB). And I haven't used it for cooking yet, but have been trying it on my skin. Too soon to notice if it does anything, but does smell good... reminds me of Hawaii and the beach.
She also uses Dr. Bonner's castile soap for a lot of things too (refuses to use anything with chemicals - wants all natural) She uses almond, but there are other fragrances. Anyone use this?
Well, that's my 2 cents for the day. We haven't been anywhere or done anything worth mentioning... so, no fun pics to show.
I did try to make Naan bread the other day (with almond flour). It tasted good, but was kind of crumbly?  I used a recipe that didn't require yeast and  I trimmed down the recipe so it wouldn't make a lot...  (and possibly I got the amounts wrong). I only wanted to use 1 cup of almond flour, so I 'calculated' what the other amounts should be. But I'll try again next week.
Thanks for reading this far. It's not a terribly interesting post. But hey, it's all I've got for today.
Hugs (virtual),
Rian