I have to report that DH got the pressure sprayer (his Father's Day gift) to work... finally. Since it is gasoline operated, you have to pull the thingamajig to start it. He pulled so many times I thought he was going to have a heart attack as it was hot outside and he was getting all sweaty. I was ready to bring the darn thing back to where we bought it, but he wanted to keep trying.

But he finally got it to work. Said he might have flooded it before. (?)  Anyway,  it works well... maybe too well as it took a lot of the paint off our outside furniture before he realized it. Apparently there is enough pressure to splinter the wood on the rocking chairs too. (ha!)

I've been planning to spray paint both for some time. I think maybe the time has come.

The outside feral cats (and the blue jays who love to sit on the iron chairs and eat from the cat food dishes) were confused when we had all the furniture pulled off the back porch and into the grass. They kept watching from a distance and apparently wondering what we were doing.

Cats don't like change - in case you didn't know.  Even our inside cats (when we had them) would get nervous if you moved furniture around. They would stay out of the way and then cautiously sneak up to it to check it out.  If you moved it when they were close, they would jump straight up into the air. (It was pretty funny).

I've washed all the outside toys... the ball that goes around in a circular thingy... and brushed off the u-shaped cat scratcher that they love.  And we put away the winter beds that were out there for next winter. The back porch fan needs to be replaced. It's old and doesn't work anymore (and it's filthy). And we could use some new cushions for the iron chairs - although I'm not sure the cats care about the cushions.

We have a huge bird cage out there that we don't use. I bought it years ago when I thought I might go back to raising budgies, but never did. We would get rid of it, but the cats use it to sleep on and play under... so, what can you do? There's also a huge barbecue pit out there that doesn't work anymore. But can we get rid of it? No, because the outside cats sleep on top and hide underneath... especially if a coyote comes into the yard. So, it has to stay too. Are we crazy?  (maybe a little)

Next is a few pics of our youngest granddaughter at a goat farm. She is crazy about all critters (like her grandmother). 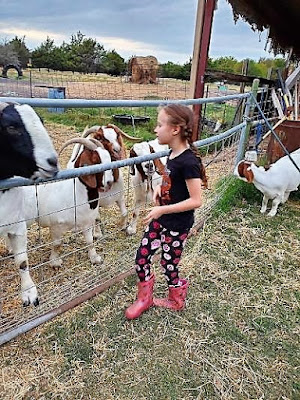 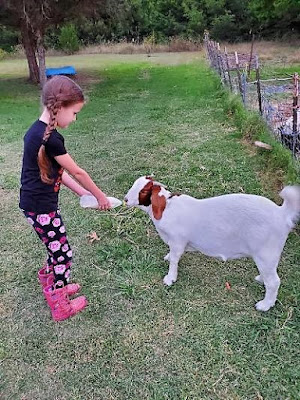 Next are just some cute pics I've come across...

Hope everyone and their fathers are having a