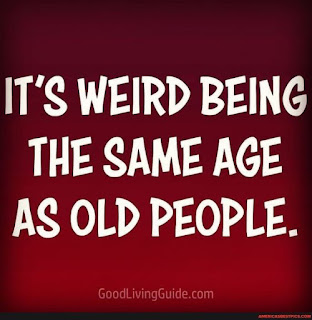 Things that remind me that I'm old.... there ARE some. Recently DH and I were standing inside a restaurant waiting for a lunch table (and yes! we are finally doing that again... of course we want a booth and not a table, but still it's progress).

Anyway, there was a bench with about 4 people sitting on it and we were only standing there for about 5 minutes when the young couple on the bench stood up and offered it to us. I said, "oh no, that's OK...", but they insisted so I sat. DH didn't. I think he didn't want to look like he needed it. But I felt like I should take it because it was so polite of them to offer. It's a bittersweet feeling... a combination of 'so nice of them to offer' and 'just how old do I look?'

This was just a recent occurrence. I'm sure I could think of others if I put my mind to it. It's not that I don't think I look old... I do. But it's these little reminders that give you a 'heads up'.

Another is the constant questioning by the medical staff of whether I'm afraid of falling?  It's such a weird question to me. Who isn't afraid of falling? But do I worry about it? No... so far that hasn't been my problem (yet).  I know it is for lots of folks my age... my very good friend is very afraid of falling... and uses a cane or a walker. But again, the question is aimed at old people and they definitely ask me. (Another friend in N.O. who is approaching 80 once told me that a doctor asked her if she 'leaked'? Her answer was "No, I've not had that pleasure yet.")

Then there's the neighbors (good hearted as they are and appreciated) that came by during the pandemic asking if we were alright and did we need them to grocery shop for us. Very appreciated and kind of them, but non-the-less another reminder of our age.

How about the one done probably unintentionally, but still a bit  demeaning when a man calls me (definitely many years his senior) "young lady". I find this uncomfortable... just an unnecessary  subtle reminder of age. 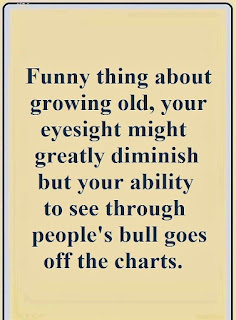 And lastly when I recently went shopping for an update on my iPhone 6 (which is no longer supported by Apple, won't download some apps, and has to be charged fairly often as it doesn't keep the charge). The young man told and showed me all the available phones - from iPhone 14 (Pro's, Max's, etc.) to the lowly iPhone 11's (which weren't available on display). They all looked alike to me... except some were bigger... and some had more color options .

He seemed to know that I just wanted a phone that worked to transfer all my info on - especially appointments and reminders. (I do use my phone for everything - except talking - don't talk on the phone much) and that probably this will be my last update. He also seemed to know that I wasn't interested in all the bells and whistles.... like an extra fancy camera and/or beaucoup memory.  Anyway, he recommended the iPhone SE (which is a form of the iPhone 13, but it kept the home button) and that's what I got. So,  was he catering to an old woman? Maybe. But he did it well.

Anyway, I was thinking about this today and decided that I'd share my thoughts. I'll bet many of you have similar experiences that have made you feel your age. Actually, my youngest granddaughter (9) gave me another one just yesterday. She was busy putting You Tube on my new phone - and I asked her if I really needed You Tube on my phone. She answered very matter-of- factly "Of course you do, Grandma".  That showed me! 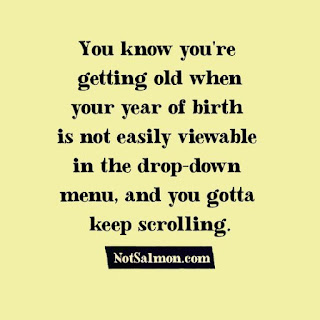 Posted by Rian at 11:00 AM
Email ThisBlogThis!Share to TwitterShare to FacebookShare to Pinterest