Hurricane Isaac... 7 years to the day 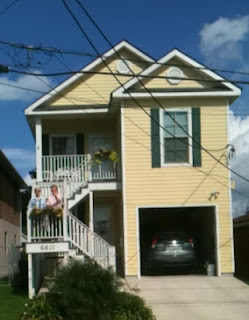 This is my cousin's house in New Orleans.  I know that I just showed this in my previous post, but her old one was destroyed by Katrina and it took 5 years to get this one built.  As you can see, the living area is on the 2nd floor.  Having just spoken to her on her cell today, she said that the electricity was off and the streets were flooded, but apparently the levees were holding.  So she was fine.  And that she was definitely going to look into getting herself a generator so she will be even better prepared next time.

One cousin evacuated to Baton Rouge, another stayed in his house in Kenner.  Haven't been able to reach a few, but I believe that they are all fine.  From the pictures on TV and from what people there have told me, there are some badly flooded areas, but not near the catastrophe Katrina caused with the broken levees and pumps.

The way the storm came in and the fact that it was so 'slow' moving (maybe 5 - 6 mph) has caused some unexpected problems.  The flooding is almost always expected, but apparently Plaquemines Parish and the West Bank got more than their share.  Plaquemines Parish is the 'toe' of the boot (Louisiana) that sits out in the Gulf.  But we must remember that back in 2005 when Katrina came in (and left), we thought at first that all was well... until the levees burst.  So it wouldn't do to be too confident yet.  Once Isaac moves on (hopefully soon), we'll have a more realistic view.

And from what we see on TV, Bay St. Louis, Gulfport, Waveland, and Biloxi got hit hard again.  These are areas where we spent our childhood summers.  In fact, we reminisced about them just this past Friday when we were all together at the house in this picture. We could walk from my cousin's house to the beach.  I loved the long piers out over the water... and once sat on one and watched a storm come in.  It was a strange 'out of this world' feeling as the blackness neared that tended to put all your life into prospective.  On TV tonight the main road, Hwy 90, running through Waveland was closed.  It looked like a raging river. My family told me that many of the huge old homes that used to be across from the beach there on 90 were not rebuilt after Katrina (who can blame them?). They said some were, but there were still a lot of empty lots.