Good Morning! Thought I'd start your day off with a video of Jack in one of the many places he likes to check out. Believe me, there isn't a cubbyhole anywhere in this house that Jack hasn't tried to squeeze into. This time I found him sitting in my dishwasher...  I've never tried to post a video before so I'm curious to know if it comes through alright. It won't *play* on the 'preview'. So please let me know if it plays OK when you view it.  Thanks! 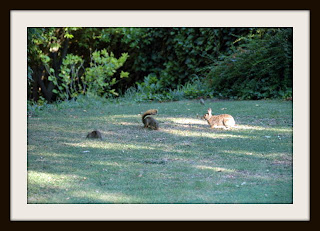 Beyond that I'm including some pictures of Rupert (a rat) and Reginald (a rabbit). These two had an unusual friendship which we were privileged to be a party to during the summer of 2005.  We were having some remodeling done to our kitchen when we noticed these two showing up in the backyard a lot together. At first we thought it just coincidence, then when we saw them lying side by side in the sun, we realized that these two critters had become buddies. Our remodelers noticed also and asked us if we had seen them... of course we said yes, we knew. The rat (which by that time we had named Rupert) and the rabbit (which we called Reginald) were friends.  The squirrel showed up occasionally, but not daily... 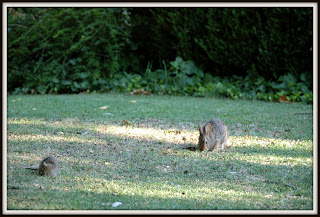 If you make the pictures larger, you can see them better...
As you can see, our backyard is a constant source of entertainment.