This was my Monday morning post which didn't get posted that day after what happened in Boston. It just didn't seem right to blog about beautiful Spring flowers after such a horrific event. And someone on the radio this morning was discussing how more 'resilient' the American public has become.  I'm paraphrasing and probably not doing it well, but the gist was that although Americans are far from the resilience of those living in war torn third-world countries, we seem to be more so now than after 911.  People Tuesday were still out on the streets running in Boston and people were still watching the news of the tragedy in airports and not cancelling their flights, etc. So-oo (I thought) this means what?  I'm still not sure...

I worked last Friday morning at the studio - partially on my chess board - getting ready to under glaze so doing some test tiles with colors (black, rust, black brown, and mahogany). But I also made a few 4x4 tiles with leaves on them to use in my hall bathroom. There's an area between the counter and the wallpaper where the paper has come away from the wall a bit. I plan to scrape that area off and add some of my own tiles. The wallpaper is very muted green/taupe with different shades of green leaves, so I thought I'd make the tiles similar.  While I was doing this, I got the idea to make some small tiles (1.5x2), put holes in the top that I can run a cord through, and then wrote saying on the tiles, like "Take Joy", "Smile", etc. I plan to use blackbird stain on these and then maybe a little clear glaze. 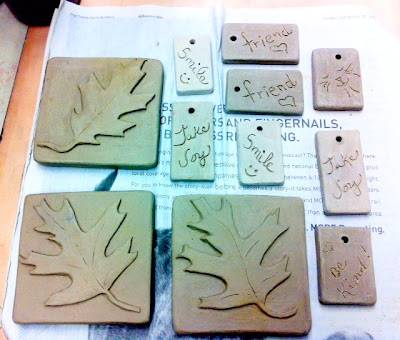 Next is a story  (The Littlest Dragon) that I wrote a while back about a young girl heroine and a dragon. I also sketched out the dragon so that his tiny size would be evident.  It's not an especially good sketch, but it gives you the idea... 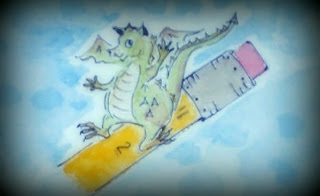 and here are some of the children's books I did make for my grandchildren when they were small: 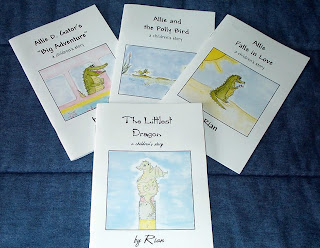 and a page example: 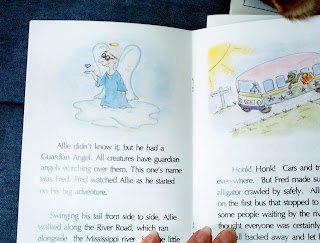 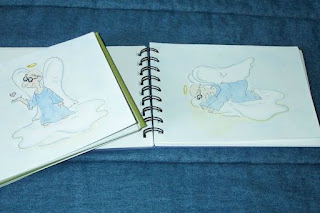 It's all great fun...  They say 'beauty is in the eye of the beholder' and this is very true, but I also believe that joy is hidden away in the heart and soul of each of us and is found and expressed in so many different ways.