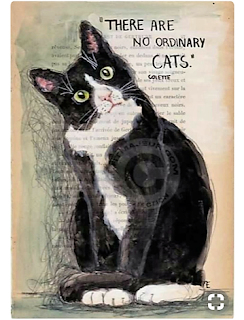 This I truly believe...

Almost all of our cats had lengthly names. His brother that passed 5 years ago from Feline Leukemia was Jumpin' Jack Lickidyspit (alias: Jack), and his sister (now suffering with her frozen jaw) is Monkey Mouse Squeaky Toy (alias: Julie).

Tux passed away this past Monday - unexpectedly. He was diagnosed 3 years ago as having chronic kidney failure and tumors. But he has done very well - occasionally having flare-ups, but he always bounced back successfully. This time he didn't. Instead his body shut down very quickly and before we knew it, we had lost him.

Part of the shock was due to the fact that his sibling, Julie, is having her own serious problems right now. Her jaw is still 'locked' or 'frozen' and despite the steroids and antibiotics, there has been very little improvement. The Vets are puzzled. Blood tests and x-rays come back normal. She eats what she can of blended catfoods and I force feed her with a syringe as needed. And she is alert and active, but getting very thin.

So we have been focused on Julie... and shocked when Tux went down so fast.

Tux was my 'familiar' - that's as close to explaining our relationship as I can get. Jack was our 'heart'... and Julie is our 'baby'. All 3 are from a litter we took in back in 2004. But Tux and I understood each other... where-ever I was, Tux was.

When Jack passed and Tux became the only male in the house-hold, he didn't know how to handle it. Jack had always been the easy-going patriarch who took care of everything and everyone (cleaned all the cats, but especially his brother, Tux - so much that Tux never had whiskers as Jack would clean them right off his face).

Lucky for us over the years none of our cats ever fought. They have all got along... sleeping with each other, cleaning each other, etc. It may be that because we took so many into our home that they got used to including another in their lives.

Tux eventually adjusted. He became the male head. When Ghost (who has attitude problems - nicer than saying she's psycho sometimes) would get pissy and start growling - Tux wouldn't stand for it. He would follow her around as she hissed and growled and lay in front of her on his back as if saying "really, what's the problem?" He also had no problem with jumping right up and laying on my lap on top of any other cat that might be laying there - so that they would leave. He considered it his right. (DH thought this was pushy - but it was who he was - he was finding his way as the alpha cat).

One thing that was obvious about Tux. He was a sensitive soul... easily got his feelings hurt. 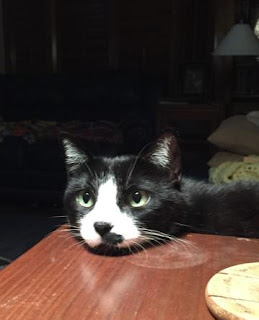 If he was sitting on my lap - as he almost always was - and one of the others came by and I leaned over to pet them, Tux would leave.

We were thinking of what Tux liked the other day and came up with this list:

Our house-hold won't be the same without him. Now I should be able to knit or read a book without him trying to knock it from my hand... should be able to drink without him wanting to stick his face into my glass... (these things that were sometimes a pain will now be missed). He will no longer have to be the first one inside the new box. (Julie and Ghost may or may not miss this) 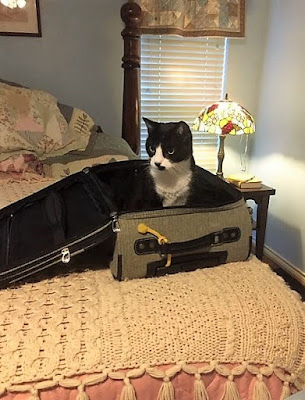 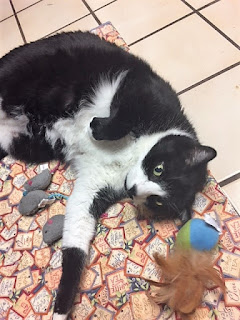 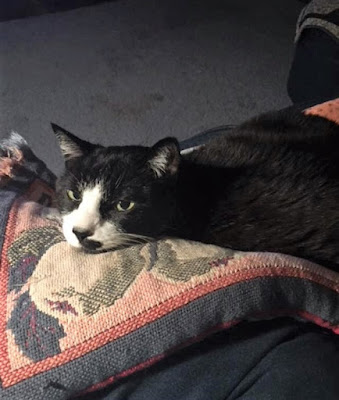 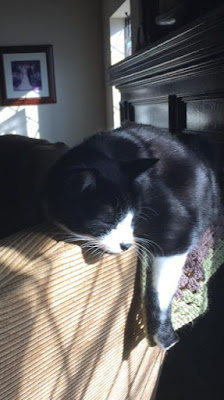 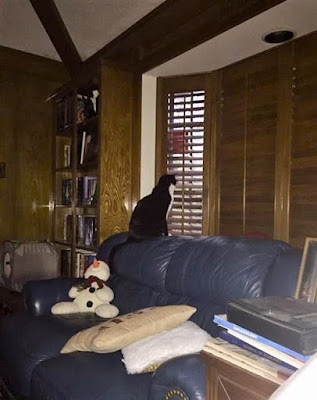 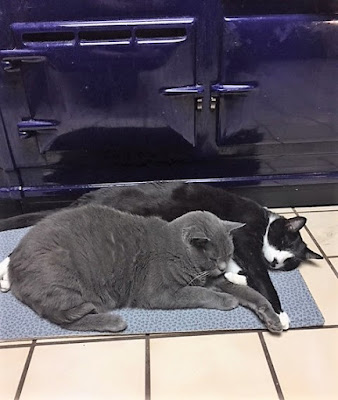 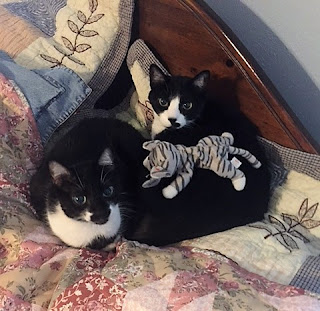 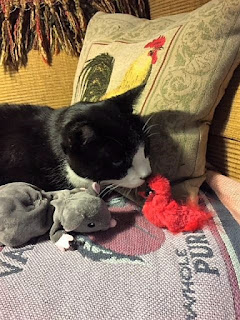 and a pic from the past