the new normal... a shelter at home day

This is how my day went yesterday...

DH gets up to go to his radiation treatment early. Used to be he went at 2pm, but now they want to close the office early so he has to be there by 8:30 (and now they take your temp before letting you inside).

Anyway, he leaves the house and I get up, make a cup of tea, share my cream with Ghost... (she only gets a tiny drop, but loves it), put the TV (news comes on), as soon as I see a certain face - I turn it off, start work on my clay, take a break and make some Lost Bread (French toast) for DH so he can have coffee and 'something' when he gets home. He'll be surprised as usually we only have coffee/tea and toast.

As the morning progresses, DH feeds Ghost and the outside ferals, then puzzles, (I actually found 5 pieces today when he was gone. I was so excited!)

There are so many tiny pieces with just eyes or solid green, ugh!

The sun is out today, so we took a walk before lunch. I heard that sunshine and Vitamin D was effective against viruses... (?) Sounds good to me. There were several people out walking the neighborhood. We all said hello but stayed far away from each other.

However, as I was passing one man who was mowing his lawn, I coughed. Now mine you, I was on the other side of the street... and it was just a little cough. (For those of you that know me, I have had a radiation cough for 20 years. Doctors told me that the radiation I received for BC probably irritated my lungs). Anyway, as we passed and I coughed, I swear to you, the man stopped mowing and went inside!

And my daughter told me that she and her daughter were in the grocery in the hill country the other day and there was a police officer stationed outside the grocery making sure that everyone wiped down their carts before entering and there was an announcement over the loud speaker saying for people to please not stop to talk with others, but to remember to social (physical) distance. She said that while shopping, her daughter said "I'm going to sneeze..." and she said, "DON'T!"

Such a strange time...

Anyway, we watch TV while eating lunch. We both had tomato basil soup and he had a sandwich while I had a slice of cheese and a few chips.  DH usually watches sports or something military while I've been watching a series called "Love Hurts" on Acorn. It's really good.  I only watch while I'm eating, then turn it off and go on to either blog, write, or continue sculpting.

Today I wanted to finish this little pie bird. He's drying on top of my Aga right now. 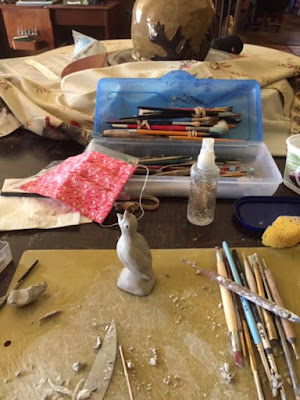 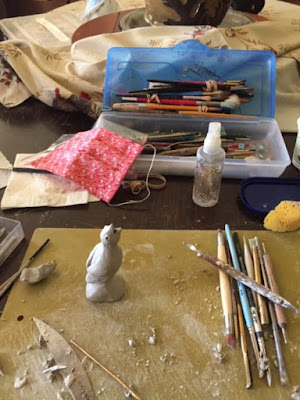 Oh, and see that red fabric there... that's a mask one of my pottery friends made for me. Isn't it sweet? We're suppose to wear a mask when working with dry clay as there's a lot of clay dust. However, I think that if and when I have to go somewhere during this Pandemic, I'll wear it. It probably won't be terribly effective... but a lot more fashionable than the others.

By 3:00, it's tea time... or coffee as the mood strikes. Both of us stop what we're doing for this break... and sometimes (most of the time if I'm honest) have something sweet to go with it. Tea to me is very calming so that's usually my drink of choice these days... a cup of tea with a dash of cream in a pretty china cup. 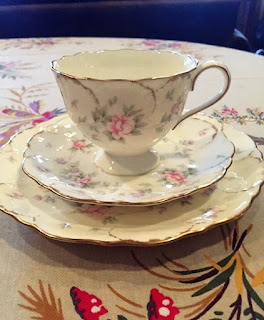 This is another of my favorites... It's called Remembrance. 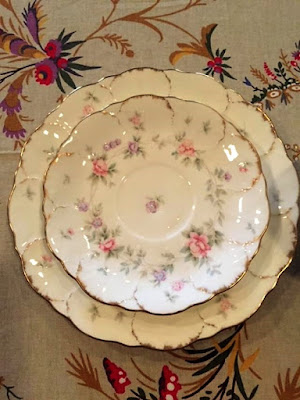 That tiny lavender rose in the center of the saucer makes it so perfect... (or is it just me?)


Then naptime (DH doesn't do naps, but he does fall asleep in his chair!)  Naptime means I retire to our bedroom and read or text friends for a bit and sometimes but not always do fall asleep. By 4:30 I need to think about supper... and this is also the time my kids tend to call. After talking to them, I'm usually late getting supper started. But that's OK. So we tend to eat anywhere between 5:30 and 6:30 depending.

Supper, TV (during which I Pinterest), then bed by 9 or 10 where I continue to read until my iPhone rings an alarm that says "Go to sleep... musically." It always makes me laugh... and I try to obey and put my book down (but not always).

Most nights I sleep well. Occasionally I get up between 3 and 5am  for a cup of tea with Ghost. She likes it when I do that. Then back to bed until morning.

That's it. Not very exciting... but with our  'Stay at home' order, not really so bad.

Take care!  Sending you my thoughts, prayers, and virtual hugs! 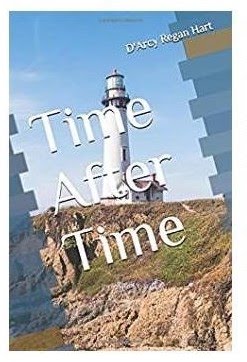