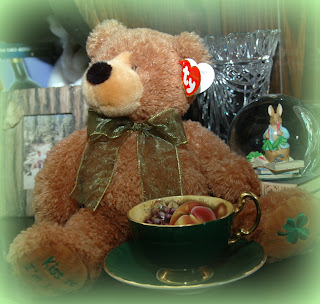 Went walking around my house looking for something that might seem like a St. Patrick's Day photo.  Found a few "Irish" looking things...

Our family name is "O'Regan/Regan".  Yes, we are Irish Catholic.  The basic story is that my great grandfather was from Ireland and moved his family to England at some point where my grandfather (William Edward Regan) grew up and married an English lady (my grandmother, Eleanor Fredericka King). Grandpa William moved his wife and children to the US around 1918. His brother Richard moved his family to Canada. The name on the Ellis Island Ship records is "Regan", but my dad later re-took "O'Regan" when he became a US citizen.  So (long story short...) my maiden name is "O'Regan".  I've tried to use Ancestry.com and can follow the family line pretty well back  into England, but haven't had much luck getting info from Ireland...

My dad met my mom  in New Orleans. She was 19 and he was 27.  My mom's parents (Pe'pe're and Me'mere') spoke mostly French in the house in New Orleans and seemed to like this Irish/Englishman  (my dad). Mom thought him too old for her at first... but he eventually won her over. They were married for 47 years when my dad passed at 75.  When mom turned 80, she moved in with us here in Texas.  DH and I  have never lived in Louisiana after graduating from college, so it was nice having her to ourselves. She passed at 94.

I'm not sure why I wrote all this.  It was just supposed to be a few pictures for St. Patrick's day...

And truth be told, except for Pe'pe're (who died when I was about 8), I never knew my other grandparents. Pe'pe're was the sweetest gentlest  man I ever knew.  He reminded me of Maurice Chevalier (most of you may be too young to remember him - did you see the movie, "Gigi"? ) And my Grandpa William... oh, the stories I've heard.  He did a little of everything in his life, from fighting in the Boer's War, mining for gold, Captain of a gunboat on the Persian Gulf, etc.  I think he would have been fun to listen to.

But I digress.  I really just wanted to say Happy St. Patrick's Day to everyone!