It's almost 4 pm Thursday and I'm thinking about supper tonight. Baked chicken, corn on the cob, and a pear salad is what I have planned. DH and I have stayed (pretty much) on our SB diet these last 3 weeks... occasionally having a thin slice of wheat toast during the week as well as a scoop of ice-cream over the weekend. But we've pretty much avoided bread, rice, pasta, and sugar for the most part. We've past the strict 2 week stage and have entered the "add in a few things like brown rice, corn, etc." stage... keeping the portions small and not over-doing. We weigh again tomorrow morning. Since I'm not feeling hungry nor skinny, it's hard to know if we've lost any more weight. But I'm sure that no matter what, it's been good for DH's borderline diabetes. So we will stay with it... hopefully until Thanksgiving. Once the holidays get here and I'm cooking for everyone, it may be a little more difficult to 'stay on plan'.... 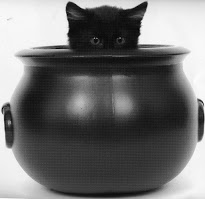 I've also been thinking about the approaching holidays... Halloween, Thanksgiving, Christmas. We're not big into Halloween. It's nice for the kids, but we've never done much more than put out a pumpkin or two, a few  black crows here and there in the trees, and of course have an abundance of candy ready for the trick or treat-ers. But there are less and less of them each year now. Seems like it's the now thing to have Halloween parties at the churches or schools (or even trick or treat at the mall) rather than door to door. To be honest, I'm good with this. I've never liked the idea of kids going door to door... (except the little ones do look so cute).  And it's always un-nerved me to answer the door to teen-agers that are taller than me!  I do have one Halloween tradition that DH likes... I make home-made pumpkin pie from the carved out pumpkin. It's actually more of a custard pie with some cooked fresh pumpkin added in... but it is good.

Thanksgiving is the big one for us. Usually my daughter and her family come in to stay for a few days. The boys and their families come over and we have a big traditional Thanksgiving dinner. DH smokes a turkey, and I make our traditional sweet potato and bourbon casserole, as well as caramelized onions and green beans, hatch pepper and cranberry stuffing with pecans,  and sour cream garlic mashed potatoes... and of course cranberry sauce. For dessert DH makes his famous cheese-cake and I make the kids favorite, "Church pudding" which is a layered pudding with a baked cookie crust. Sometimes we have a pie or two also... generally Buttermilk, Chocolate, or Kentucky Derby (which is a bourbon pecan pie with chocolate chunks).

Now Christmas has changed since our kids all have their own kids. Used to be they would all come over for a formal Christmas dinner, but now that the kids are older and they sometimes have their own plans, we've down sized our get -together on Christmas morning to a late morning Christmas Brunch. That way they can still have their Christmas at their house, then come by and open gifts here (with a little coffee and pastry) and still get home in time for afternoon naps for the little ones (and parents) as well as time for the older ones to do their own thing. It seems to work out well.

Update:  It's now Friday morning and DH and I just did our *weigh in*.  DH has now lost 10 lbs. I have lost 8.  As I said, we plan to stay on it for a few more weeks... gradually adding back some good carbs (whole wheat pasta, brown rice, etc.). Then hopefully we will have jump-started our minds and bodies to consciously watch and be more careful without having to actually write everything down and weigh in as often.


Have a great weekend!


Posted by Rian at 10:30 AM
Email ThisBlogThis!Share to TwitterShare to FacebookShare to Pinterest