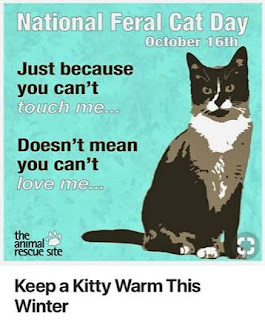 OK, today I'm going to vent! Skip this post if you'd like. It won't be pretty. But every once in a while something happens that just 'pisses' me off (horrible expression I know - but one I hear a lot).

This started with a note on the Neighborhood App. (By the way, it wasn't our neighborhood, but still...) It starts with:

"I'm so tired of neighbors' cats roaming the streets and henceforth neighbor's yards."

Apparently she herself owns a cat and only lets it outside while she watches it (which is probably a good practice - not only because of other "neighbors' cats roaming, but also because of feral cats, bobcats, and coyotes which also roam the neighborhood). But she is upset because her cat has now started 'marking her territory' both inside and outside her home... and this is due to the other cats being around.  She goes on to complain about those who leave their garage door open in bad weather, feed feral cats, etc.

Now I understand that having other animals come into your yard can be an inconvenience. Lots of things are inconvenient. That's life. So no outside or feral animals are allowed in her subdivision? Really? So... if  it has a home, but is left outside to roam, it's owner doesn't love it, or if it's homeless, it doesn't deserve to have shelter or food? I find this hard to understand... only her personal animal is loved because she is a 'responsible owner'? She may be responsible (which is a good thing), but does she only care for her own animal?

I know I will get a lack of flack over this. And that's OK. I do understand the other side of the issue. I've been in the animal medical business my whole life. And I do know that this is just my opinion. If this political climate has taught me anything, it's taught me that everyone certainly doesn't think like me. This goes for the welfare of animals too.

If things were ideal, there would be no homeless animals (or homeless people for that matter), but things are not ideal, and we deal with them as best we can... humanely and with compassion. The catch and release program for strays is a great program where the cats are caught, vaccinated, neutered, and released (which by the way wouldn't solve her 'roaming cats' problem). But not all the ferals can be caught... and not all owners wish to keep their cats inside (it is safer - but that's a personal preference).

In my own mind, there is probably not an answer to some of these problems... except maybe to show a little love and kindness... to others besides your own.

Thanks for letting me have my say (whether you agree with it or not)...

Posted by Rian at 4:07 AM
Email ThisBlogThis!Share to TwitterShare to FacebookShare to Pinterest
Labels: venting