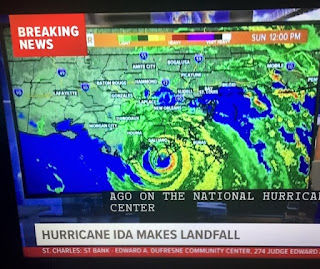 Just thought I'd report what we've heard by text and phone before, during, and after Hurricane Ida from family and friends there.

First of all, everyone is OK... power is out for everyone pretty much unless you have a generator.

And the levees held! (so far anyway... not sure the danger is past, but officials seem confident)

Lots of down trees and powerlines... debris everywhere. Some flooding in Lakeview (my old and stomping grounds - but our house went with Katrina) and other areas.

They're asking people to stay in their homes until the streets can be cleared and service vehicles can get to where needed.

They're also asking people who evacuated to stay away for the time being as 911 services are down and hospitals are already full with Covid patients.

Oxygen tank swaps could be done at Fire Stations.

Since 911 was down, go to Fire Stations or flag down police if needed.

Check on your neighbors.

And they gave some websites that might be needed.

One was damage.la.gov - for any pics you might want to send to help the city see damaged areas.

Another was ready.nola.gov - for helping N.O. restore itself.

I tried to keep in touch with family during the storm by text. But after the power went out, I knew they had to conserve the battery on their phones.

The news we were watching reported that the roof blew off Metairie Towers, a condo building where a dear friend of mine lives. This scared me as we had been texting earlier and I couldn't get any response for a few hours. Finally she texted me that she was OK.

Cousins in N.O. and Slidell are OK... power down, some flooding, but OK.  I will check to see if others check in on Facebook.

DH's family in Baton Rouge have lost power, but have a generator.

Haven't heard from family in Madisonville. Madisonville and Mandeville had flooding due to Hurricane Ida pushing Lake Pontchartrain north onto their shores.

Anyway, just sharing what I know at the moment...  and we continue to watch WWL New Orleans news to stay updated.

I imagine with the power out, people are going to get hot in their homes pretty quick. That's another worry. New Orleans is known for it's heat and humidity...

Hope this isn't TMI... may not be of interest to all, but it's been a nerve wracking 24 hours here.

*If you have more info and want to share, please do...*

Posted by Rian at 12:29 PM
Email ThisBlogThis!Share to TwitterShare to FacebookShare to Pinterest
Labels: Hurricane Ida