No big plans for the double 7's... since Monday was the 4th and I didn't want to get a cake (I had just made that Lemon Icebox pie for the 4th)... and DH's birthday is next week and he's sure to want a cake! (we didn't need a pie and 2 cakes) DH is borderline diabetic and that would be a bit much.

But we did splurge and had 3 small filet mignon's with loaded baked potatoes and green beans. I don't buy much red meat ever, so this was a nice change. And even though, they were small, they were delicious.

But I did get flowers and balloons and a few gifts from the kids: 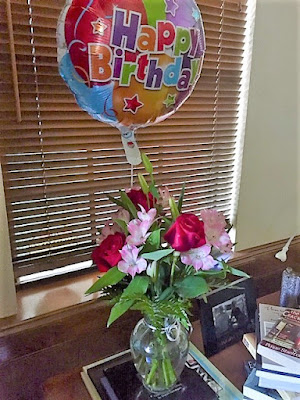 We took another 3 boxes of books to Half Price Books this morning. And I'm getting ready to fill the boxes up again. DH and Grandson brought down more old furniture and stuff from upstairs that we will be either giving away or donating to the Salvation Army. I'm hoping to clear out the 2nd upstairs bedroom which has become a 'catch all' and put in a new bedroom set - so that there's a guest room again.

Mom moved in with us in 1994 and she had the entire upstairs for her things (2 bedrooms, bath, sitting area, etc. - previously our 2 sons area). When she passed in 2008 (at 94), we emptied it out and only replaced a bedroom set in one of the bedrooms - which Grandson now has. The other bedroom became a dumping ground. But that's about to change...

Temp was 106 F yesterday and supposed to be 107 today. Not planning to be outside much... except to gather more parsley for the caterpillars we're raising. They eat it up as fast as I bring it in.

I really need to get my 2nd Covid booster soon. DH will have to ask the doctor this week if he should wait because of the Bell's Palsy. I imagine he should wait a few weeks, but perhaps I'll go ahead and get mine. We have company coming to visit in August and I know it's possible to feel unwell for a day or two after the booster... so I'd like to get that over and done way before they come.

Afraid this isn't a very interesting post... just life at our house. Oh, I should mention that we haven't seen One Eye (the old one-eyed feral cat) in a while. He usually spent a lot of time sleeping (and eating) in our yard. But he was getting pretty thin and sleeping a lot - so we wonder if he has left us for good. We wouldn't be surprised as we thought he was going to die over a year ago when he turned up all beaten up and the one-eye missing. He slept in the cat bed on the front porch every day and only got up to eat. But he eventually recovered and hung around. He wouldn't let us get too close, but he would come when I called him and throw him little treats (he loved bits of chicken or salmon). 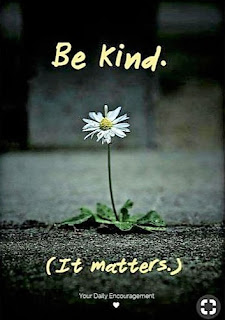 It's Saturday... have a good weekend! Enjoy, but stay out of the heat! (and maybe put water outside for the critters?)

(Didn't get to post this during my birthday week... so held it off until DH's birthday which is today!)

Posted by Rian at 9:36 AM
Email ThisBlogThis!Share to TwitterShare to FacebookShare to Pinterest