I've been baking a lot lately. Made a batch of home-made nutty granola and some of Martha Stewart's favorite chocolate chip cookies to send to my oldest granddaughter in a care package.  She is going into her 3rd year studying Urban Development at Texas A&M. She tells me she is interested in using Urban planning for firms that are hired out to incorporate green spaces such as parks into cities. Apparently this major encompasses some architecture...  which makes me think she may have inherited this desire since my dad, sister, and brother were all architects (I'm the odd one who went into Veterinary Medicine).

Unfortunately I forgot to take pics of any of my baking. But here is a pic of the granola taken in the past. 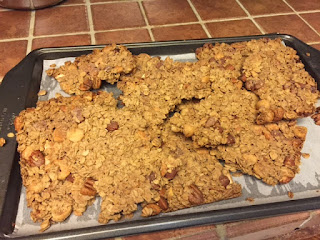 Both these recipes are keepers. The nutty granola uses pecans, cashews, almonds, and Macadamia nuts. It is so-oo good. And the MS favorite chocolate cookies were a hit too. This was a new recipe for me (and I added not only chocolate chips, but a combination of  Reese's mini's, peanuts, caramel pieces, etc.). The cookies were large and I could only bake 6 to a pan... so I had to make several batches.

And I also baked a large banana nut loaf - because I hate to waste bananas and I had 3 getting soft. This is also a great recipe that comes from my King Arthur cookbook. It is so moist and tastes wonderful. I halfed it - putting half in the refrig for the boys and the other half in the freezer for later.

And I have to send you this video of Winston, my oldest son's dog. He recently had surgery and we sent him a Get Well gift which he received yesterday and we received this pic and video showing how much he liked his gift. You might have to enlarge the video, click on it twice and sometimes there is an option to enlarge to whole screen. 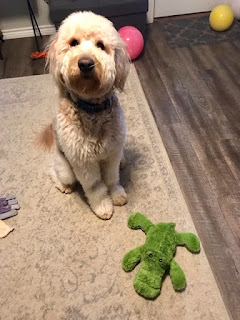 Winston had a real frog that used to visit him when they lived in Granbury. So we were looking for a toy that resembled a frog (but it had to be tough enough for a big dog to play with). This is the closest thing we could find... kind of a cross between a frog and a gator?  But he seems to like it.

Also my youngest granddaughter spent the night last week. She's been wanting to do this for the longest, but for many reasons (overcrowded computer room, no bed in upstairs 2nd bedroom, etc.) Anyway, since we finally furnished the upstairs guest room, we said, Sure! However, she didn't want to sleep up there alone, so I sent DH up there and she slept with me. It was fun. She is a talker... (and a kicker- restless legs?) and we talked late into the night. We had pepperoni pizza for supper and chocolate chip pancakes for breakfast! Here is a pic of her at the breakfast table with her eyes glued to her cell phone. 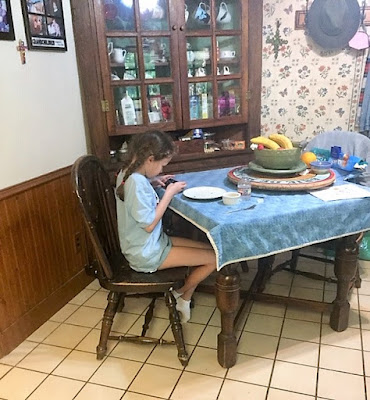 Guess that's all my news for today. Going to leave you with this cute meme I found that reminds me of Ghost - our departed gray kitty. She used to lay with me on my bed (my favorite spot to read) when I read in the afternoon and/or at night. 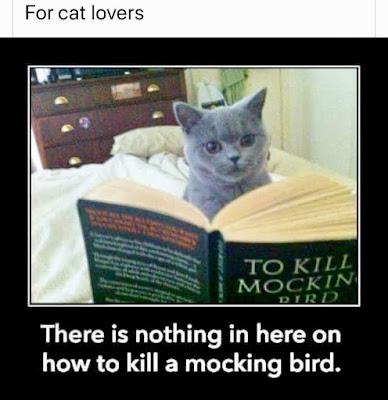 and a few more funnies: 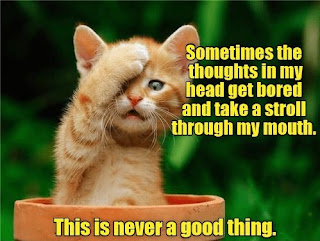 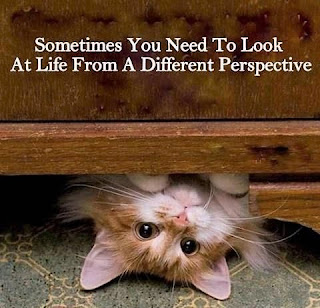 Really closing this now. Hope I didn't bore you to tears...  but outside of my book, "Carrick Cove",  finally being available on Amazon, life goes on as usual around here.

I will recommend a series we've been watching on Netflix. It's called "Virgin River" and it's really good.

And I heard about the passing of Queen Elizabeth today. I have to say that she was someone that I greatly admired and I doubt that anyone will ever fill her shoes...  but I do wish the best for King Charles and her family.

Posted by Rian at 2:24 PM
Email ThisBlogThis!Share to TwitterShare to FacebookShare to Pinterest