We love horses... or at least all the girls in our family do. I never owned my own horse growing up, but grew up riding at  local stables whenever I had the chance. At 9 my cousin and I rode his old mule, Buttons, everywhere around his place in Mississippi.  In college at LSU (as an Animal Science major) I had to take on both an Angus steer and a Quarter horse for show. It was an interesting experience. My steer, (a black Angus) whose name was "Monster", was cantankerous. He tended to kick me a lot. The little mare I had to show was  a sweetheart. She did well .

When our daughter was 8,  we gave her riding lessons at a local stable here in Texas. At 12 we had the opportunity to get her a 2 year old Quarter horse named Cider.  She was a beautiful little palomino filly. The two of them spent a lot of time together both at the barn and at shows.

But our daughter eventually grew too tall for Cider as Cider was only 14 hands. So we passed her down to another young girl at the stables... and got Smokey. Smokey was a 16 hand black Thoroughbred (couldn't find a pic). He was bought from the racetrack through the stables. She rode Smokey in hunter-jumper classes until it was time for her to go off to college.

Then we had to find a home for Smokey. Paying to board a horse at a stables for 4 years with no one working him was not an option. We ended up giving him to the police department who used mounted horses for some of their events. We later heard that one of the men there became fond of him and ended up taking him home.

Now our daughter has a daughter of her own and she too rides. They started her riding at 3... and she loved it! She now rides in cross country events on Tootsie, her own quarter horse mare. They also have Hemi, Tootsie's sibling.

And at one time they had Goliath, an absolutely gorgeous black Friesian (17 hands). But Goliath was abused at some point in his early life and was very skittish. My daughter bought him from the stables that had taken him in and she spent years working with him. He would follow her around like a big puppy. He was beautiful and he was sweet, but he was also unpredictable. Goliath died of serious colic... or torsion due to a twisted intestine a few years ago. We all still miss him.

Here are a few photos: 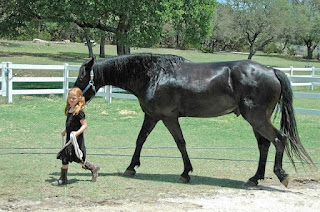 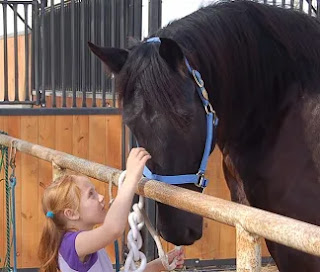 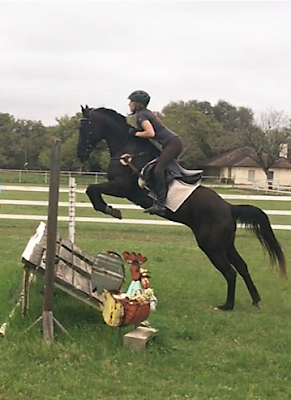 Granddaughter is now in college at A&M, but luckily my daughter has a barn on her property so Tootsie and Hemi will always have a home...
Now for an update on my strange symptoms: tingling sensations, light-headed and the original problem of waking up with my heart racing and headache (tested me for sleep apnea and heart problems - all negative).
Well, we may have found the cause - borderline pernicious anemia due to low B-12, low D, and low MCHC. Apparently a low MCHC means not enough hemoglobin/oxygen in your cells. I'm thinking that during the day with me moving around, the oxygen is not a problem, but during the night when still and asleep, it drops to a point where I wake up with a headache and a racing heart due to lower oxygen and the heart beating faster to compensate. They say this is caused by the low B-12. So I'm taking B-12 injections. Hopefully this will help...
And I just got my first Shingles injection Monday. No reaction as far as feeling bad, but my arm sure hurts and there's an area about 2x4 inches that is red and hot. I've been putting cold compresses on it.
That's it for today! But I can't close this without saying how awful Hurricane Ian has devastated Florida. Praying for all those people there. Unbelievable how quickly life can change. Having grown up in Louisiana with hurricanes, I really wonder if the numbers and the strength of them are increasing due to climate change. I suppose it is a possibility.  When I googled this, I got some confirmation... but not anything conclusive.
Closing this with a picture I took from Facebook that made both DH and I laugh. Technology vs Nature!

Posted by Rian at 11:52 AM
Email ThisBlogThis!Share to TwitterShare to FacebookShare to Pinterest