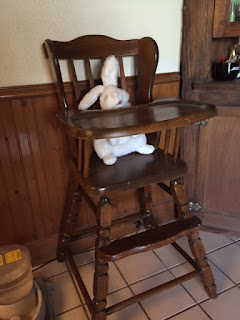 We had our family pre-Easter dinner yesterday evening. Unfortunately our 3 year old grand daughter hadn't had a nap and was 'acting out' a bit. But she compensated rather well and said that the bunny was being bad and had to have a time-out. We thought this was very astute of her as the bunny kept throwing his food and utensils, so definitely needed a time-out. She used her dad's old high chair for this. Don't know if this was indicative of anything since we kept it for use for the grand kids, but she never wanted to use it herself. I think she is a 'free spirit' and doesn't like to be confined.

For dinner we had baked ham, mashed potatoes, potato salad, green salad, baked beans, cinnamon apples, and sweet corn spoonbread. For dessert we had a favorite family pudding dessert that has a baked crust and the chocolate chip cookie pie that I gave the recipe for in an earlier post. Most of the evening was spent sitting and talking around the table. Great family time!

And on another note:

I found this cat cartoon on Deb's blog, "Just Cats"... and had to re-post it. 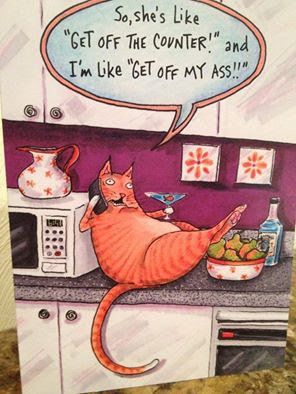 Reminds me so much of Julie's attitude towards our kitchen counter:

Well, that's about my news for today. I'll leave you with a picture of the bunny and the bear who sit on my mom's old recliner waiting for grand daughter to come over and take them on an adventure. I think this time bear was glad he didn't get *time-out*!

(...and if you're wondering where the cats are during all this... well, when everyones over, it gets to be a bit too much for them. So they are hiding safely away in our bedroom. If not, it's possible that some would join us at the table and others would definitely be joining bunny in his time-out.)


Posted by Rian at 11:09 AM
Email ThisBlogThis!Share to TwitterShare to FacebookShare to Pinterest