This turtle (which we dubbed 'Pumpkin') showed up in our yard yesterday going after the dry cat food we put out for the feral cats.  We hadn't seen any turtles in a while and figured it was too hot for them. Now that it's getting cooler, they may start going into hibernation... but I think it's a bit early.  Anyway, we were surprised to see him and dubbed him 'Pumpkin' since we had just put out our huge Halloween pumpkin in the front. And if you look closely you can see the small red mark on his back where I 'touched' him with nail polish.  We do this to recognize him when he turns up again.

DH is in the process of making a huge batch of red beans and rice.  I love his red beans.  It's one of my favorite meals.  We probably won't eat it tonight although the house smells so good, it will be hard not to. I bought some cod on sale at Central Market yesterday and need to cook it tonight... along with some very young fresh asparagus tips.  But we will have the beans for Monday and Tuesday... and I'll probably freeze the rest.  I don't freeze much.  But red beans freeze well and still taste delicious.


This is Ghost with the new series by Belmond.  In the next picture, I spread out the books so you can read their titles. 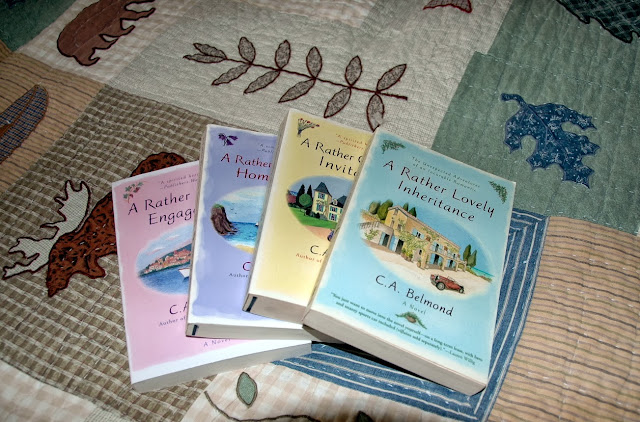 I haven't gotten very far so I will reserve judgement at this time.  But I was told that they were a good read as well as some other series called 'Ladybug Farm'.... or something like that.  I believe the author is Bell?

And lastly, I did complete the crochet baby blanket that I've been working on.  It is made of big fluffy variegated yarn and is very soft... 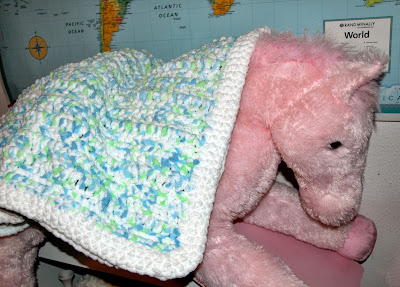 Posted by Rian at 3:11 PM
Email ThisBlogThis!Share to TwitterShare to FacebookShare to Pinterest