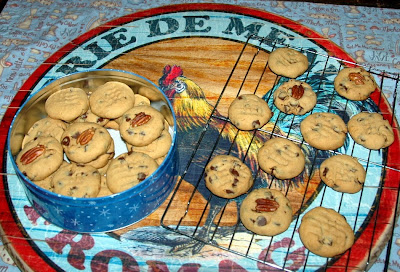 OK, I didn't get my flu shot this morning. DH did.  I went in and the nurse looked at my scratchy throat, said  that it didn't look bad and I had no fever, so it was up to me.  Since I know that something is going on... either sinus or the beginning of a cold, I decided to reschedule for Monday.  By then, I'll know if whatever this is is on it's way out... or has decided to stick around.  In the meantime I will continue with my salt water nasal spray, gargling with Listerine, and drinking hot tea.

Just finished making a tin of peanut butter chocolate chip cookies for grand daughter whose birthday is this coming week.  She will be 12.   Some of the family will be driving down to visit them and I will send these since they are her favorites as well as a few other things. Since she started doing cross country trials and shows, she is into all the Dover and other horse paraphernalia. We used to make it down there for all her birthdays when she was little, but since they plan to be up here for Thanksgiving (next month), we're going to skip this trip. October and November is birthday time for 3 of our 4 grandchildren... so it gets busy... followed by Thanksgiving and Christmas.

This is a video from one of the cross country trials B went to last week.  Some of the girls are there for training and some for the show.  My grand daughter was there this time for training (for both herself and her horse).  They get to run the course and see what it's like.  It is my understanding that if you're actually in the show, you are not allowed to do this. But it's great experience for the younger ones to get to see what a course is like.

Going to mention something here that is against my better judgement.  I usually stay out of politics, but I was listening to some people talk in the pottery studio the other day about the 'government shutdown'.  They were saying that 'it should stay shut down and that the country probably works better without the government interference'.  Personally, I don't understand all that's going on, but it seems to me that if it was going to shutdown, then the people 'who cause or who are calling for' the shutdown should have their paycheck or benefits with-held during this period. That might be an incentive to fix the problem... and sooner rather than later.  And I'm not saying that either side should 'cave'... only that some sort of compromise should be possible. And whether it is or isn't, doing something that actually hurts people and the already struggling economy doesn't seem the way to go. That said, I'm done.

Posted by Rian at 11:05 AM
Email ThisBlogThis!Share to TwitterShare to FacebookShare to Pinterest