It's Thursday morning and when I logged in this morning it was apparent that the blogs I follow were gone... again.  They usually turn up at a later date, but I do wonder why this happens. Guess it's just a blogspot glitch?

The new Fall TV programing has started.  Too soon to really make any comments, but it is nice not to have all reruns in the evenings.  I've started watching some new (new to me) BBC programs; Lark's rise to Candleford, Last Tango in Halifax, Death in Paradise, Miss Fischer's Murder Mysteries, Hetty Wainwright Investigates - to name a few.  There's not a lot on TV that I like these days, but it is nice to have 'something' to watch in the evenings.  Most of these BBC programs come on very late at night or very early in the am... so I have to DVR them.

The cats are doing fine... both the inside and outside ones.  I'm making a cat bowl set (food dish and water bowl) for Molly.  She is 20 this year.  And it gives me a little break from making all those cylinders.

I'm also working on glazing my chess set . It's a slow process as there are 64 little tile squares that first need firing (I underglazed them on the greenware. Unfortunately the underglaze I used for these acts more like glaze and will stick if I don't wash the bottom part off - some of the other potters realized this when their work 'stuck together' in a clump). Once they are bisqued, I can then use a clear glaze and fire them again in the oxidation kiln. And I'm thinking about maybe using some color on the chess pieces themselves.  They have only been bisqued so far.  Here's a pic in case you forgot what it looked like as a 'work in progress' last spring. 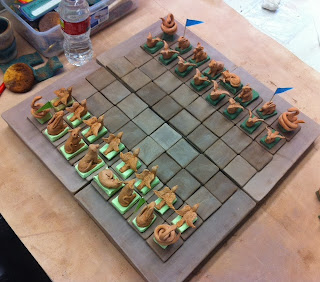 This picture shows the chess pieces bisqued (the platforms they sit on are underglazed in light and dark greens - these underglazes don't stick), but the tiles under them had not yet been underglazed (they are now in rust and black).  I'm thinking maybe doing the birds a light blue, the dog black, cat white, rat gray, bunny tan, and snake green. What do you think?

And I'm almost finished my second baby blanket.  Gave the first (the basket weaved one)  to my nephew's daughter who is due in December and just had a baby shower last week.  This one is much larger and will be for my grand daughter to use as a toddler blankie.  I'll post a pic once I've got the border done.

DH just popped in here to ask me if I was still making him a peach buttermilk pie this morning.  I told him that I planned to do this before leaving later to meet a friend for lunch. So I may have to put this post on hold for a bit.

OK, pies are made (made a fresh peach buttermilk and a plain custard).  Pork roast is in the oven.  And the blogs I follow are back!!  Hurray!

Friday, October 4th - I didn't get to post this yesterday, so am continuing on today.  Have already been to Central Market for groceries and am now about to meet a friend for lunch.  She is one of my B&N friends... a customer that came by the bookstore several times a week  (and probably still does). We hit it off when I was working there in the mornings and still really enjoy getting together for coffee and conversation.


Posted by Rian at 1:53 PM
Email ThisBlogThis!Share to TwitterShare to FacebookShare to Pinterest