This is a puppy quilt I'm making for my friend's little dog, Mei. I gave her a puppy quilt for her old dog, Teddie, a while back and he uses it faithfully. Sometimes he shares, sometimes he doesn't. The last pic she sent me of them, Teddie had the quilt and Mei had a towel. So I decided Mei needed her own quilt.  This is also a new (but simple) pattern that I wanted to try. I really like the pastel colors.

Next is just a few basic clay pieces I made in pottery class last week to see if I could still throw after the long holiday. I'm actually working on some casserole dishes this semester... both hand-built as well as thrown. There is a technique I'd like to learn where you throw a round casserole on the wheel and then square it. But I think I may try my hand at a little hand-building this time around... as well as my little animal sculptures. 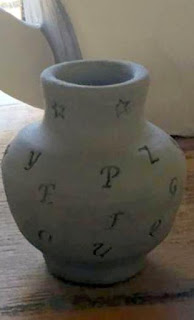 ... and lastly, Dell had a simple laptop on sale at Best Buy this week for $199.  DH and I took a look at it today and decided that it would do as a backup computer until our old Dell Desktop crashes - which hopefully won't happen for a year or so yet. Then we plan to get a good laptop to replace it. This one does however, have Windows 10 on it. Our old computer still has Vista... but it works fine... so far.

Oh... I also took a 70 Selfie of myself the other day for a friend in N.O.   She and I were room-mates in college and although we don't see each other often, do email regularly and send silly selfies. This one wasn't too bad... most of mine are really funny looking. 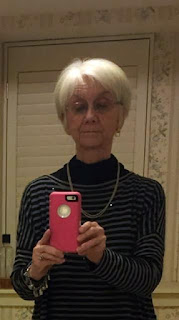 She keeps telling me to look up and smile... but when I do, I look like a deer caught in the headlights.

Have a good week!


Posted by Rian at 4:23 PM
Email ThisBlogThis!Share to TwitterShare to FacebookShare to Pinterest