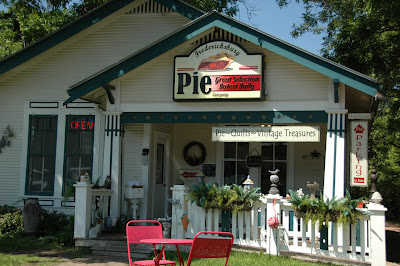 This was a Pie Shop in Fredericksburg that was adorable... and the pies were fantastic!  We tried to get their recipe for the crust, but they said it was 'secret'.  I really wish they had one like this here by us.  By the way, the Apple Cinnamon Pecan Tea Cake was a hit - extremely moist and very vanillery (is that a word? works for me).  I will definitely make it again.

Preheat oven to 350
Mix butter, sugar, and vanilla in mixing bowl
Beat until pale and creamy
Add eggs one at a time
Add flour, baking powder, cinnamon, and sour cream until just combined
Add pecans
Spoon into lightly greased pan lined with non-stick baking paper.
Cut apples into halves, peel, and core.  Slice apples and push into the top of batter.
Sprinkle apples with cinnamon sugar.
Bake for about an hour and 15 mins.
Let cool
Brush with butter and sprinkle cinnamon sugar over before serving. 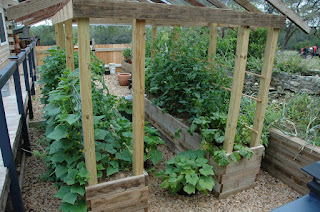 These pics were taken at my daughter's place.  They have a pretty good-sized vegetable garden.  These are the raised beds.  I believe they have squash, tomatoes, spinach, onions, and cucumbers (maybe radishes too).  Their turtles love the tomatoes.

And this is an Artichoke plant: 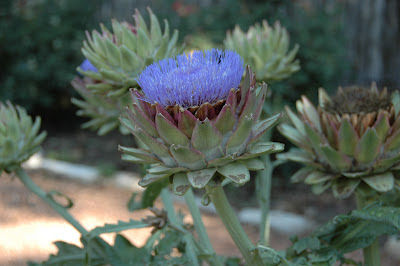 Isn't it beautiful?  I had never seen an artichoke plant before this one.  I love to eat artichokes...with the steamed leaves dipped in butter or the whole artichoke stuffed with breadcrumbs, parmesan cheese, and garlic, but I had never seen one actually growing. This one was at the herb farm in Fredericksburg.  I bought a cutting and took it to my daughter's place. Hopefully its doing well.
Posted by Rian at 1:09 PM
Email ThisBlogThis!Share to TwitterShare to FacebookShare to Pinterest
Labels: apple, artichoke, cake, cinnamon, garden, pecan, pie, raised beds, shop, tea, turtles, vegetable