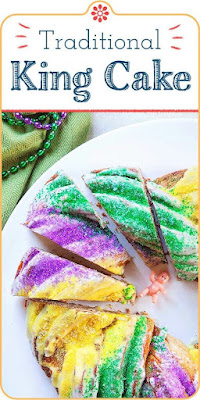 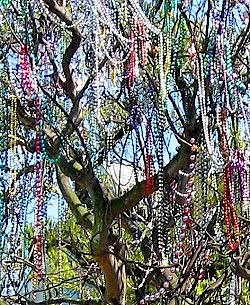 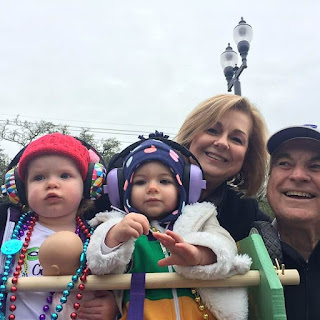 Yes, we have a king cake... and there's a bit of a story behind it too. DH and I went to get a king cake yesterday, but once there - no king cakes were on display. However, we could see dozens behind the bread department on tiered trays. When I asked for one, the lady seemed a little confused and said that she would see if there were any left. (I could see dozens!)
She later came back and asked me if I wanted traditional or cream cheese?... I said cream cheese. She disappeared again. In a little while she came back and handed me a cake. I thanked her and then looked at it and it said 'traditional'.  I called her back and she started  conferring with another lady in the mist of all the king cakes.
Finally another lady came out and asked if I wanted cream cheese or strawberry cream cheese? By this time I was beginning to wonder what the problem was, but said "either one will do". She brought me out a strawberry cream cheese king cake. I thanked her and left.
Later I waved at one of the employees who handles our curb side pickup and she came over to talk to me. She said that she was happy to see us inside the store again. Told her we came inside to get a king cake - and she looked surprised that we actually got one. Said that they had a tremendous order for king cakes to be delivered just yesterday and they were working like crazy to get the order out. Said I should guard my king cake with my life! (So now we knew what was going on...)
The beads in the trees in the French Quarter are all part of Mardi Gras. It's one of the reasons we put our Mardi Gras beads on our Christmas tree here in Texas.
The last pic is of my cousins in New Orleans with their grandkids several years ago (before the pandemic). This is how we all spent our Mardi Gras youth - on top of ladders watching the parades go by. I texted them this morning and no one is getting out there this year. They don't feel comfortable with the crowds yet (and I wouldn't either - it's too soon - IMO).
So, forgive me for posting again. It's not my usual once a week post lately...  things keep coming up... and I couldn't ignore the first of March and/or Mardi Gras.
Hugs (virtual),
Rian
Posted by Rian at 11:17 AM
Email ThisBlogThis!Share to TwitterShare to FacebookShare to Pinterest